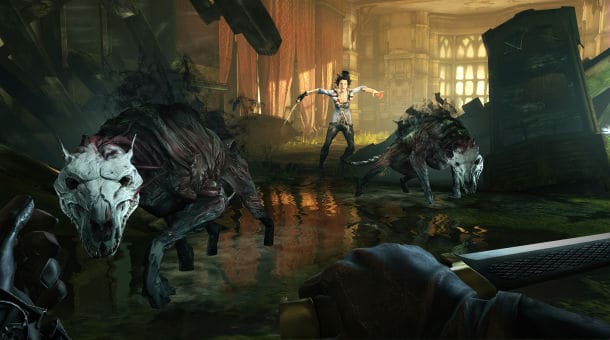 Bethesda announced today that Dishonored’s second story-based DLC, The Brigmore Witches, will be released on August 13.

The latest DLC expansion once again puts you in the boots of Daud, one of the main antagonists of the main Dishonored campaign and the main character in the previous DLC chapter, The Knife of Dunwall. Like Corvo from the original game, Daud has been gifted special powers by the mysterious Outsider, though Daud is substantially less heroic than Dishonored’s masked hero. Players who have completed The Knife of Dunwall will be able to transfer their stats, powers, Chaos level, and equipment over to the new expansion.

The story of The Brigmore Witches focuses on Daud as he tracks down the Delilah, the head of the titular witch coven. Daud’s manhunt will take him to a few never before seen areas of Dunwall and will introduce new characters to interact with. The game’s developers say that Daud’s story arc will come to an end in The Brigmore Witches.

Dishonored was probably my favorite game of 2012 and I’m glad that Bethesda is giving me more of it. If you haven’t played it yet, you really should: it’s one of the best and most original stealth-action games I’ve played since the original Splinter Cell, and it’s currently on sale on Steam for a mere 10 bucks.