For those who don’t know, Shovel Knight is a KickStarter project that launched just a couple weeks ago on March 14. I myself only first heard about the game when I caught a glimpse of it in the Indie Games Megabooth at PAX East. Combining a love of retro platformers and modern graphical touches, Shovel Knights proclaims to be a “love letter to 8 bits”, drawing comparisons to such age-old classics as Mega Man and Castlevania. As Shovel Knight, your goal is simple: Defeat the Evil Enchantress and save your beloved. Notice how I didn’t say beloved princess or girlfriend? More on that in a moment.

Shovel Knight set a pledge goal of $75,000, and managed to secure backing for the project within two weeks. Now, the team has set a list of stretch goals that are currently in the process of being, ahem, unearthed, if you will. The project currently sits at just over $97,000 dollars pledged, and with that, the latest stretch goal set at $90,000 was reached; enabling the team to include an achievement system for all versions of the game. As of now, Shovel Knight is set to release on PC, Wii U, and 3DS. But the Wii U and 3DS don’t use an achievement system, you say? Duly noted, and that’s why developer Yacht Club Games will be integrating a custom system into the title. According to the update page announcing the completion of said stretch goal, the team wants to create original achievements you’ll actually look forward to unlocking; ones that encourage different playstyles and offer a lot of inspiring replayability.

Lined up for the next stretch goal is the oft-desired New Game + mode, which will likely be met as the team only needs to reach $100,000 to get there with 9 days left to donate. Standard New Game + mode rules are in effect here: Players can restart the game with all of their weapons and items upgraded, but enemies will likewise be tougher. Additionally, resources will become scarce and the team has also hinted at the possibility of adding new challenges to the game for the second playthrough.

If that goal is met, the team has a few other stretch goals posted to add a bit more flavor to the experience. Such gameplay enhancements include playable boss characters, Linux/Mac support, a challenge mode, and, what I find most agreeable, a gender swap mode. That’s right, if the team reaches the admittedly lofty goal of $160,000, they will add the ability to swap the genders of all of the game’s main characters. This not only includes the protagonist, but the villains, or “The Order of No Quarter” as they are called, as well. No longer will Shovel Knight simply be a man’s quest to defeat the vile Enchantress and rescue his beloved, but also a strong warrior princess’s journey (let’s call her “Xena”) to reclaim her lost land from the terrible Enchanter and rescue her love interest. While part of me wishes this is something the team could include from the start, obviously funding is an issue for the game so I’m at least grateful they’re mindful enough to list it as a goal. It’s also worth noting that the gender swap feature is not the final stretch goal, as other desirable enhancements such as a challenge mode and a 4-player battle mode are further along the pledge lines. While realistically speaking, they’re probably ranked in order of financial viability, I’m going to just pretend the developers did it specifically because they care more about gender equality than co-op or multiplayer. 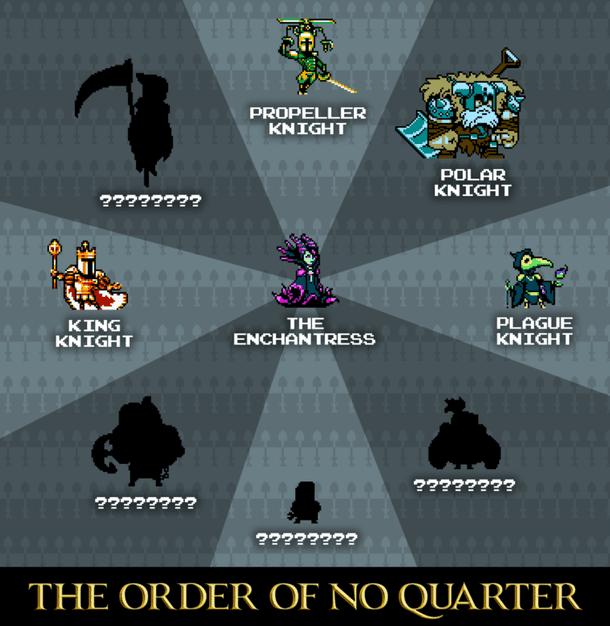 As far as pledge tiers, any who are interested can get a digital copy of the game when it releases on PC for $10. The team also noted that any pledges of $15 or more can choose the platform they’d like to receive the game on. $15 sounds like a pretty sweet deal for a well-made retro platformer on Wii U or 3DS. Additional tiers for pledges over $15 receive the usual goodies like a soundtrack, softcover coffee table book, and digital instruction manual. Some of the more bizarre “rewards” for higher pledges include official, hand signed Shovel Knight dirt allegedly acquired from each realm of Shovel Knight’s kingdom. Or having a yacht party with the development team, and they do mean on an actual yacht. One of the more interesting pledge rewards is being able to take part in design meetings with the team via Google Hangouts. Seeing as how Shovel Knight is still in the preproduction phase, this would mean the chance to offer actual input and genuinely important feedback before any major decisions are implemented.

Are you folks interested in Shovel Knight? Which stretch goal would you most desire seeing the campaign fund? Let us know in the comments below.