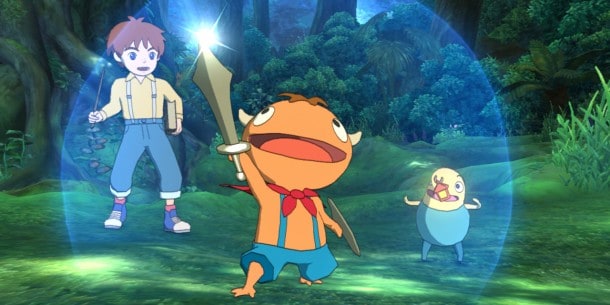 After what seems like an eternity of waiting, developer Level-5’s Ni No Kuni: Wrath of the White Witch will finally be available on U.S. soil.  Being rightfully described by many as a well-blended mix of Dragon Quest, the Tales Of series, and even a bit of Pokemon, Ni No Kuni is the JRPG that PS3 fans have been clamoring for.  Featuring a 40-hour main story, in addition to a wealth of interesting side-quests, Kuni promises to keep players engulfed in it’s captivating serene world for quite some time.

Wrath of the White Witch tells the tale of young protagonist, Oliver, who after certain unspoiled events, decides to embark on a journey across worlds in hopes of becoming a master magician. Ni No Kuni, you see, is actually another world that exists parallel to our own.  Throughout the game, Oliver is able to cross between these worlds; making impactful decisions in one that are sure to effect the other.

Combat takes place in a battle arena a la the previously mentioned Tales Of series, with modern-day standard real-time battles taking the place of the traditional turn-based JRPG dynamic.  Additionally, Oliver and the companions he meets along the way possess the ability to capture and train Familiars, creatures that can be tamed upon battling and used as allies in subsequent enemy encounters.

With Graphics developed by famous anime producers Studio Ghibli, Ni No Kuni is one of the most gorgeous and unquestionably breathtaking experiences available this generation.  Every moment of the game seems to take place in a living anime world on par with some of the best films the studio’s ever created.

A treat for any fans of the JRPG genre, and even more so for fans of beautiful visuals, engaging characters, and immersive storytelling; Ni No Kuni is available in stores today.  A full review of the game will be coming soon, so stay tuned right here at IGXPro.