Square-Enix created remakes of Dragon Quests 4 through 6 on the DS, and it looks like they’re going to continue remaking the remaining entries in the series on the 3DS: according to some leaked scans from the latest Shonen Jump, the previously PS1 exclusive Dragon Quest VII is getting a full 3D remake that will be out in Japan sometime next year. 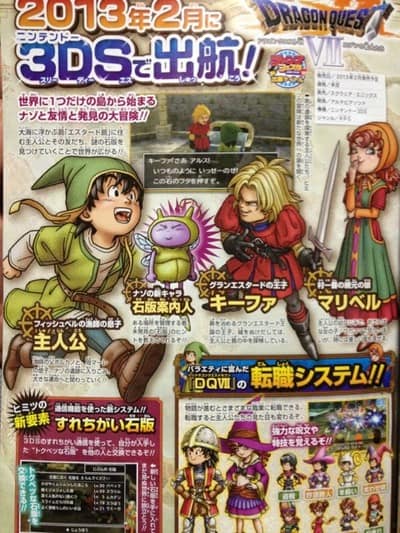 Dragon Quest 7 was originally released for the PS1 in 2000 after many substantial delays, and while the game sold millions in Japan (as expected,) critics in the US lambasted the game for its slow pacing and antiquated graphics. The tiny screenshots from the scans seem to suggest that the remake will fix the graphical issues at least, as the game seems to have been remade over with a graphical style similar to Dragon Quest 8 for PS2.

Speaking of Dragon Quest 8, hopefully this new DQ7 remake is just a prelude to a 3DS port of DQ8, which is still one of my favorites in the series. No US release date has been announced yet, but considering that Nintendo of America made a substantial chunk of change publishing the DS Dragon Quest’s in America, I think it’s safe to assume that we’ll be getting Dragon Quest 7 on American 3DS’s eventually.

Bastion, one of the anticipated titles of this years Summer …