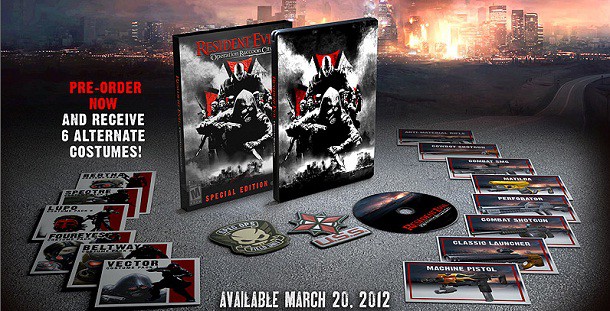 It’s almost time to go back to Raccoon City where it all started and what better way to enjoy that then by digging into a box filled with DLC cards and patches. Er, that’s supposed to sound fun. Either way, that’s about what you will expect for an additional $10 this March 20th. Well, there may be something else in there as well.

In addition to the aforementioned U.S.S. and U.S. Spec Ops embroidered patches, Power Weapon Pack and U.S.S. Costume Pack, those that splurge for the Special Edition of Operation Raccoon City will also get a spiffy Steelcase with exclusive art and a stylized sleeve. Pretty neat right? Well it’s only ten bucks more, so if you really love RE then this of course is a must have, otherwise you may be fine with the standard edition of the game.