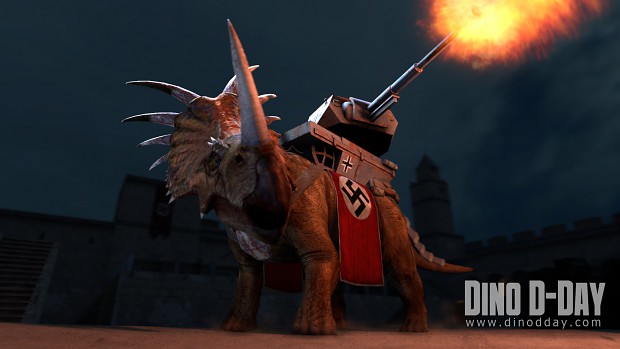 When you play videogames, you expect a certain level of strangeness; I mean, everybody’s played Super Mario Bros., and when you really think about it, the premise of that game — a plumber who has to save a mushroom princess from a giant turtle — is downright bizarre. A certain suspension of disbelief is required for all games; even “realistic” games like Call of Duty feature soldiers who can heal bullet wounds by staying behind cover for a few seconds, and despite growing more realistic with each iteration, GTA still lets you murder hundreds of random people with reckless abandon. Whether you’re playing as some Call of Duty super soldier, an elf who has to fight a giant pig, or even a rapping dog, games, by their very nature, place you into some very bizarre situations when you think about it… but there’s your standard video game weirdness which we’ve all grown numb to, and then there’s the truly weird stuff that even the most experienced gamers have a hard time comprehending.

But instead of mocking these games, we should applaud them for their willingness to try something new. With the gaming industry dominated by increasingly safe, generic shooters and creatively bankrupt sequels and quick cash-ins, it’s games like the ones I’m about to list that help keep originality alive. Sure, they may not exactly be the best games out there, and they may not necessarily reflect the best qualities of gaming culture, but hey, at least they’re unique. If games are ever going to be taken as seriously as movies, books, or music, there has to be acceptance for titles like this; just as there’s an audience for avante-garde, abstract movies to go along with the droves who watch summer blockbusters, the gaming community should appreciate these titles, not in spite of but because of their strangeness. While these games will never replace a good Half-Life or Zelda, they’re good examples of the breadth of experiences that gaming can provide beyond plain old murder simulation, and hey, at the very least, who doesn’t enjoy seeing something completely bizarre now and then? 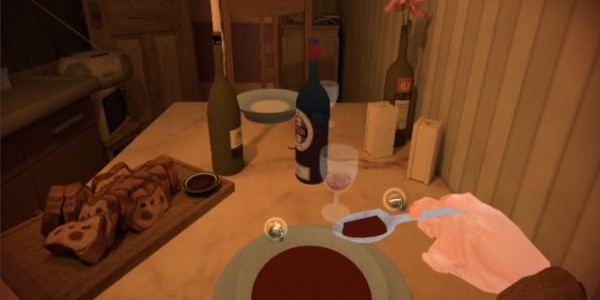 Dinner Date puts you in the shoes of Julian Luxembourg, a introverted British chap who’s waiting for his dinner date, who predictably never shows up. As you virtually experience getting stood up, Julian waxes poetic about a number of topics about his life: work, his friends, his hobbies, yellow fever, food, and he even manages to recite a few verses of Lord Byron. It becomes pretty clear over the course of the night why Julian’s date has ditched him, but despite him being kind of a wanker, I’m sure any guy who’s ever been rejected will identify with Julian’s night of self-pity and misdirected frustration.

If it sounds strange, it is, but Dinner Date is a strangely compelling experience: the dialogue is well written and acted, and watching Julian gradually go from anxious to impatient to angry is strangely entertaining, much in the same way watching a couple argue or seeing a train wreck is. Dinner Date isn’t much of a game, as its a very short experience with no discernible goals (well, other than gaining a strangely fulfilling feeling of pity or schadenfreude, depending on how much you identify with Julian,) but it’s certainly an interesting and unique way to spend an hour, and it’s well worth the $5 asking price on Steam, provided you’re willing to try something different. 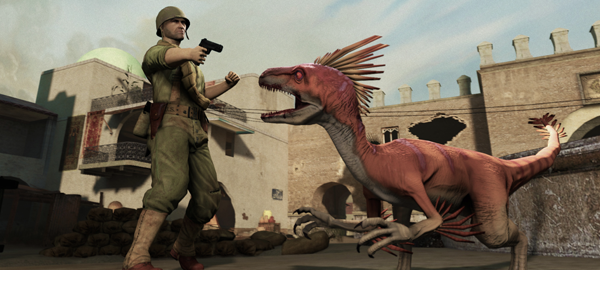 Nazis and dinosaurs have been enemies in a lot of games, and it’s easy to see why: Killing evil Nazis allows you to gun down people without all of the pesky guilty that’s associated with killing a person, and dinosaurs are just, well, bad-ass, and who doesn’t want the chance to fight one (and actually win)? Dino D-Day manages to combine two of gaming’s most favored opponents and put them into one highly ridiculous, but thoroughly entertaining scenario.

Set in an alternate version of World War 2 where the Nazis have mastered control of dinosaurs and are using them to fight back against the Allies, Dino D-Day finally allows gamers to see if America’s Greatest Generation can hold their own against prehistory’s most successful hunters. The game suffers from some balance issues — the dinosaurs are extremely overpowered — but Dino D-Day still provides some hilarious multiplayer fun provided you don’t take it too seriously, and it manages to inject some much needed life into the stagnant WW2 shooter genre. Dino D-Day won’t make you forget about Team Fortress 2 or Call of Duty, but if you’re in the mood for some light-hearted fun, I can’t think of a better combination than velicoraptors and blowing gibs off of SS soldiers.

While the other games on this list possess genuinely interesting or fun ideas, Gal Gun is really the type of thing you can only enjoy if you’re a pervert. While the game doesn’t have any actual nudity and never does anything *ahem* “hardcore,” it certainly does revel in its perversion; instead of going for headshots, critical hits are delivered by shooting your *ahem* “phermones” at specific body parts (take a guess as to which ones,) and the girls in this game have a penchant for wearing short skirts while standing in high places, and apparently they all hate bras and love to jump up and down. So hey, if you want to ever give up on being with an actual girl, give Gal Gun a try. Who knows? It might actually be a decent “shooter.” 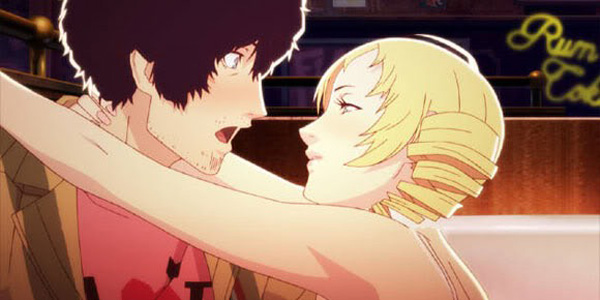 If Gal Gun represents the extreme end of sexual immaturity in games, than Catherine would be on the opposite end of that scale: where as most games treat sex and romance as a means to titillate, Catherine is one of the rare “Mature” rated games that’s actually for genuinely mature, sophisticated adult audiences. It’s story is a study on commitment, infidelity, and responsibility that is leagues beyond the teenage angst and sexual exploitation that you’d usually expect from a video game, or any piece of popular media for that matter. Of course, you wouldn’t know that by looking at the game, as publisher Atlus was keen on playing up the sexual aspects of it’s presentation (hey, it sells games,) but while Catherine may superficially resemble cheesecake wank material like Gal Gun, it’s an actually a respectable piece of fiction.

But while finding a narrative of Catherine’s caliber in a game (and a Japanese developed one, at that,) is a rare, strange sight indeed, it’s gameplay make it’s just unique: At it’s heart, Catherine is a puzzle game, and a pretty damn good one at that. Not only are the puzzles a metaphor for protagonist Vincent’s completely inability to understand women, but the way they’re presented — with nightmarish imagery and lots and lots of sheep — make even the bizarre presentation of other Shin Megami Tensei games seem tame by comparison. Catherine is definitely weird for a lot of reasons, but it’s also probably the best, most genuinely great title on this list. 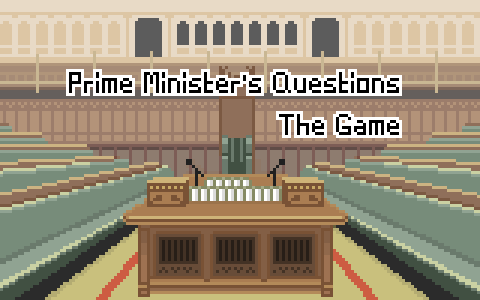 While similar in purpose, the British Parliament is very different from the Congressional system we use here in the US: instead of each member of the House or Senate getting their turn at the floor, the Prime Minister and the head of the opposition party merely stand in the center of a room and take turns taking verbal pot shots at each other while their respective parties hurl cheers and insults from the stands. It’s far livelier than the faux-emotional rhetoric spewing that goes on in the US Congress, and while it’s just as blindly partisan and depressingly ineffectual, at least the Brits are more honest about it.

Prime Minister Questions: The Game turns these lively debates into a sort of 8-bit fighting game, where baseless accusations and passive-aggressive insults take the place of punches and kicks. Now, the engine powering the game isn’t anything fancy, so you obviously shouldn’t expect Street Fighter, but despite the actual simplicity of the product itself, Prime Minister Questions: The Game deserves some recognition for its concept alone. At the very least, the game is free (downloadable here) so if you want to take a very snarky look at the British government, give it a shot. It’s no where near as brutal as the real arguments, but it’s a fun diversion nonetheless.