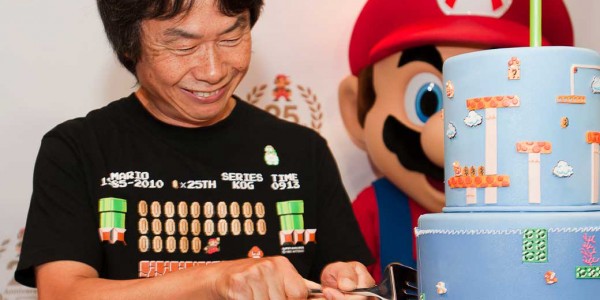 Shigeru Miyamoto, creator of Mario, The Legend of Zelda, Donkey Kong, and the director/producer of countless Nintendo classics, announced today in an interview with Game|Life that he will no longer be acting as the project leader for Nintendo’s usual big-budget Mario and Zelda sequels, as he has done for the last two decades. While it’s sad that he’ll no longer be working on the franchises that he created, he’s still definitely employed at Nintendo, and has a new role within the company.

The 59 year old Miyamoto is arguably the most influential game developer ever, earning achievement awards  and recognition from the Game Developers Conference, TIME magazine, The Academy of Interactive Arts and Sciences, and, for some reason, was even knighted by the French Minister of Culture. He’s been listed as a key influence by other game designers, ranging from Japanese developers like Yuji Naka (creator of Mario’s rival, Sonic,) and Hideo Kojima (creator of Metal Gear Solid,) and even a few Western devs, like Epic’s Cliffy B (creator of Unreal, Gears of War,) who has openly admitted to being a big fan of Miyamoto.

But in recent years Miyamoto has stopped directing games and has handed the reigns of Nintendo’s key franchises off to a new generation of game developers within Nintendo, while he himself had assumed more of a producer/managerial position. While Miyamoto says he has enjoyed being a producer and has also enjoyed being “able to nurture the developers inside Nintendo who were able to create something like this or something like that,” referring to the relatively new blood that worked on recent Nintendo hits like The Legend of Zelda: Skyward Sword and Super Mario 3D Land, he wants to get back on the “frontlines” of game development, as he puts it. His new role at Nintendo will see him directing and designing games again, with small teams, or perhaps, as Miyamoto muses, he’ll even try to create a small game by himself.

It’ll be interesting to see what games Miyamoto ends up creating in his new position. Considering he’s widely regarded as the best game designer of all time, I think it’s safe to give him the benefit of the doubt in his new role. Hopefully, this will result in some new IP’s for Nintendo; while I certainly wouldn’t mind more Zelda sequels, the company hasn’t introduced a new, internally developed franchise since 2001’s Pikmin, and it’d be nice to see some new characters from the mind that created icons like Mario and Link. At the very least, whatever he does, it’s guaranteed to be better than Wii Music (hey, you can’t win every time.)