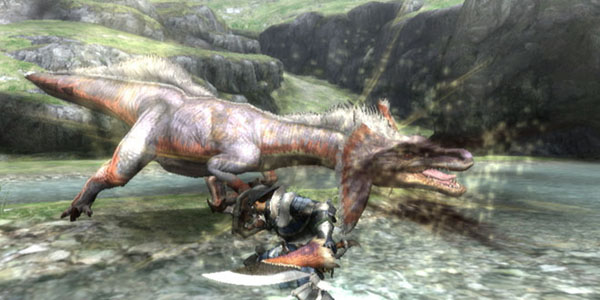 Nintendo of Japan has been teasing a  “big announcement” for Tokyo Game Show, and thanks to some leaked pics of the newest issue of Japanese gaming mag Famitsu, the secret is out: Capcom’s hit Monster Hunter series is coming to the 3DS, and it’s bringing with it a rather… “homely” looking 2nd analog stick attachment.

While more details will likely be revealed later this week when Nintendo “officially” announces the two products, here’s what we know for now: The new version of Monster Hunter Tri, now dubbed “Monster Hunter Tri-G” will incorporate elements from both the Wii and the PSP versions of the game; the underwater sections and bosses that were cut from the PSP version will return, and will be combined with the newer extra content that was originally created for the PSP version. 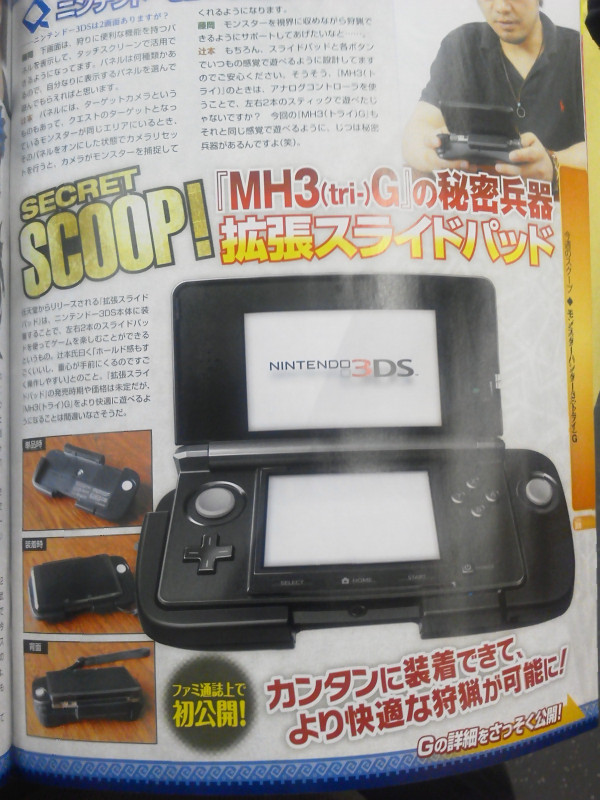 As for the add-on, it wraps around the entire rear of the 3DS system, and adds a second analog stick as well as second set of shoulder buttons, giving the 3DS a set of controls that are more or less on par with traditional console controllers. Beyond the obvious, uh, hideousness of the add-on, the thing looks pretty big and unwieldy; comments have been made about the size of the PS Vita, but it seemingly pales in comparison to this: this new add-on seems like it’ll turn the previously sleek and small 3DS into an original Xbox controller-esque, hand-cramping behemoth. At the very least, it appears that the attachment is optional (for Monster Hunter anyway,) and exists for people who would prefer console-style controls and whose hands haven’t yet permanently contorted to “The Claw” formation required for playing previous iterations of the game properly on the PSP.

It’s been no secret that the 3DS hasn’t experienced the same run-away success that Nintendo enjoyed with their other systems, and while sales for the system have boomed ever since the price drop several weeks ago, Nintendo still seems to be in panic mode regarding the troubled system, especially with the eminent release of Sony’s Vita rumored to be just a few months away. With the dedicated handheld market becoming increasingly marginalized by the popularity of gaming apps on smart phones, the 3DS does definitely need something big and new if it’s going to compete with the Vita (*cough*good games*cough*), but I’m not sure this new hardware, which could potentially split the user base by forcing developers to create games for hardware that users may or may not buy, is the answer to the system’s problems.

If anything, the addition of a second analog stick attachment only lends credence to the rumors that an improved redesign of the system (which would hopefully incorporate the new control inputs in a more ergonomic and aesthetically pleasing manner,) is coming sooner rather than later.

Regardless of how ridiculous (and uncomfortable) the new attachment looks, having Monster Hunter on your system is a license to print money, and this new deal by Nintendo and Capcom is guaranteed to have a positive effect on 3DS sales, at least in Japan.  There’s no word yet of a U.S. release, and due to poor sales of the PSP versions of MH in the U.S., Capcom seems hesitant to bring new games in the series over themselves (the Wii version of Tri only came out here because it was co-published by Nintendo,) so we’ll likely have to wait for the official word from Capcom regarding the series’ future in the States.