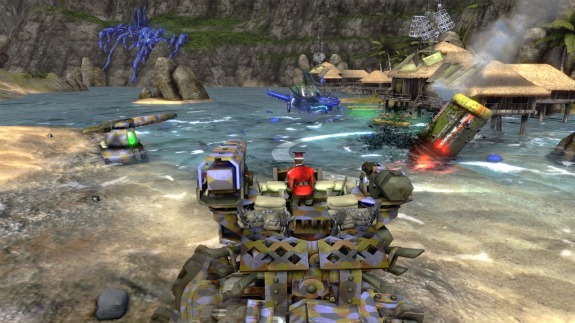 I’ve been a fan of DoubleFine ever since they developed the Xbox 1/PS2 cult hit platformer Psychonauts.  While their games certainly aren’t perfect, they have a charm and wit that is all too sorely lacking in most modern games.  Their newest game, the action/strategy hybrid Trenched, has that trademark charm and wit in spades, and it also just happens to be incredibly addictive to play as well.
Trenched takes place in an alternate reality where World War 1 is interrupted by an alien invasion.  Naturally, the only way to repel the invaders is by taking WW1 style trenches and then mounting them on walking robots for use as mobile weapons platforms.  The concept is pure DoubleFine– a ridiculous, tongue-in-cheek joke expanded into a genuinely bad-ass final product.

Your mech/trench controls as you would expect: left trigger fires the weapon mountain on the left side of your robot, while the right trigger does the same for the right-hand weapon.  You move with the left stick, aim with right; basic shooter stuff.  But Trenched is far from your basic shooter: in addition to shooting your enemies down yourself, the left bumper button is also used to place stationary turrets, which will fire upon any enemies that enter its range.

The aliens in Trenched come at you in numbers that are far too massive for you to handle on your own, so proper turret placement, in addition to the usual shooter required twitch based reflexes, are required in order to survive each level.  Lots of games have attempted to combine action elements with real time strategy before, including DoubleFine’s own slightly underwhelming Brutal Legend, but Trenched is perhaps the first game (on console, anyway,) to get it right.

While I was expecting to like Trenched, I wasn’t expecting to love it as much as I do now: unlike the awkward real time strategy-based battles in Brutal Legend, Trenched was instantly accessible but felt as though it’d provide a fair, evenly paced challenge.  We won’t have to wait long to find out though, as Trenched comes out exclusively on Xbox Live Arcade at the end of the month.