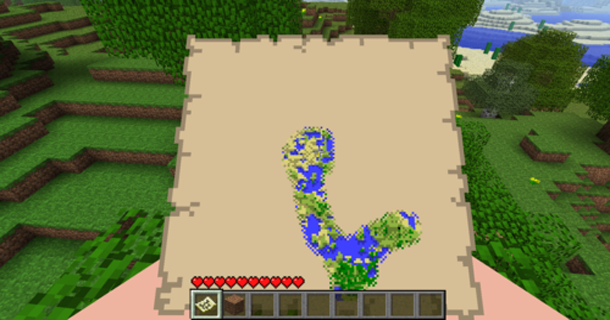 Minecraft, the indie hit by the Swedish programmer Markus Persson is fairly notorious for multiple things, Creepers and several YASDs aside, one of them is getting lost, and having to rely on third-party products for maps.

Not anymore. According to Markus’ blog, he will be adding maps to the game that will automatically update as you explore its “region”, each map tied to a certain area means that you will need a map for your castle, one for the surrounding area, and possibly more if you go beyond your usual zones.

Previously, one of many third-party tools were needed to generate maps of your Minecraft world, which is entirely randomly generated from a single seed value. The common issues with these programs often included having multiple options that needed to be tweaked, speed issues in rendering larger worlds, especially the few real-time updating ones. Minecraft is already rather notorious for its high system resource requirement due to how the game actually works.

I feel this is a very significant improvement to the game, as I have gotten myself completely lost more than once, and I’ve often torn down entire forests to make signs saying my approximate location. They’re usually wrong and when I fire up a map generator, I realize that I’ve gone 30 miles east.

I hope this is expanded on to make maps for caves, which I find is the most important part of Minecraft, as all the resources you need to make that massive castle is located in the underground.

A video for Uncharted 3 showed just how unbalanced the …