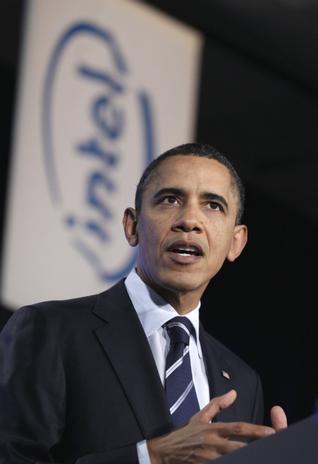 One of the world’s largest and most advanced sites for research and manufacturing of semiconductors, the Oregon site of Intel Corp., saw President Obama paying it a visit yesterday. The President conversed with various students as well as high-tech workers and technicians of the ultra-modern microprocessor factory. Innovation in America and the importance of education in maintaining the competitiveness of the country were the two main themes of the visit.

Paul Otellini, President and CEO of Intel, expressed his immense gratitude in hosting the President of the country and said that the company share his beliefs of America retaining its vibrant economy through futuristic industries and an innovative culture. Intel has over 15,000 workers in Oregon, and is the largest private employer of the state. It was also the catalyst in changing the nature of Oregon’s agriculture and timber based natural resource economy to make it one of the most high-tech manufacturing and research and development centers in not only the country, but the whole world, bringing in a large number of new investment options.

Obama, during his visit, also went to the Fab D1D which is situated at the Ronler Acres campus of the company. It is a facility for fabricating silicon wafers and also one of the most cutting edge silicon manufacturing plants of Intel. Obama’s visit here can be understood by the fact that the semiconductor industry of the country has been its leading exporters on an average through the past 5 years. Otellini, in comments before the President, announced Intel’s plans to develop another, larger and more advanced, Fab at its Chandler site in Arizona for producing microprocessors for meeting future demand. The company is currently planning to invest around $5 billion in this facility which will be the most advanced of its kind in the world after its completion and will employ thousands from surrounding areas.

The holiday season is once again fast approaching and people …