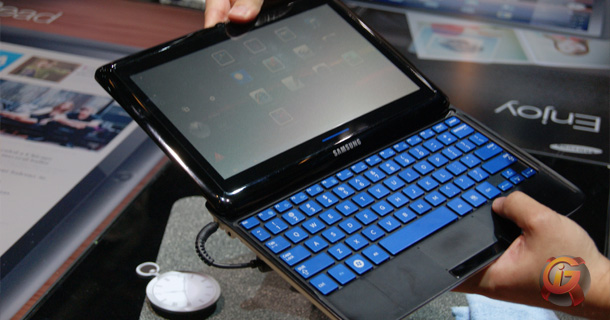 Let’s start with what I am personally most excited about, the Samsung Sliding PC Tablet series. Samsung was a bit protective of this item and wouldn’t let anyone touch it, so I can’t say how it feels like to use it. It’s basically a tablet, but better, because it runs on Windows 7 and works just like a netbook. The keyboard will slide out and you can prop up the screen to make it feel more like a netbook, so it can basically replace your current netbook or tablet.

Running on a Intel Oak Trail Z670 CPU, with a 2GB RAM, and varying storage size (depending on which tablet you choose from the series), this product seems to be a good step towards a more integrated tablet.

The display size is 10.1″, has HDMI output, and weighs in at an asstonishing 2.2 lbs. Now, because it’s more like a netbook, it is nowhere near as compact as typical tablets, but it is something that can be overlooked for such a spectacular machine in my opinion. It also has two webcams, one on the front and back  of the tablet, so it touches all bases.

The best news? It has 3G capabilities( and possibly 4G), just like every decent tablet should, and will be released during the 2nd quarter. Unfortunately, they couldn’t release any information about pricing, but mentioned that it something we all should look out for in the next month.

If you are looking for something more powerful, there is the Asus Eee Slate EP121. Also running on Windows 7, it houses a Intel Dual Core i5 470UM CPU, 4GB RAM, and a 64GB Storage Space. Weighing in at 2.5 lbs, it has a display of 12.1″, HDMI input, and a webcam. It is much thinner then the Samsung tablet, if that is something you guys really care about. This tablet also has a keyboard that will slide out for a more computer like experience as well. 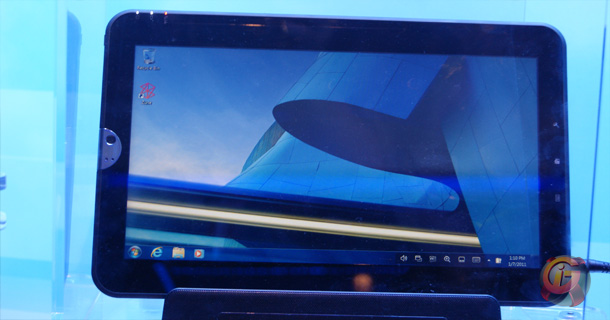 The lightest of the bunch is the Toshiba Windows Tablet. Running on the Windows 7 operating system it weighs in at 1.9 lbs. Now those .3 lb difference from the Samsung may not sound like much, but when you travel and walk around as much as I do, that .3 lbs makes a difference. It was, however, placed within a glass case so I am not able to report if it has a sliding keyboard or not.

The tablet is running on the Intel Oaktrail CPU, it has a 2GB RAM, 64GB storage size, and has a 11.6″ display. Like the others, it has a a webcam and an HDMI output. 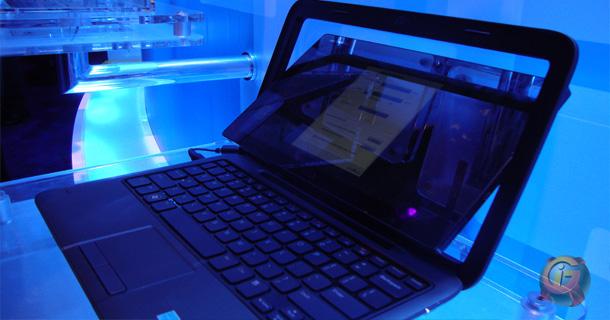 The heaviest of the group is the Dell Inspiron Duo. Running on Windows 7, it houses a Intel Atom N550 CPU, 2GB RAM, 320GB storage space, and a webcam. At 10″, it weighs in at 3.4 lbs, but is the only tablet out of the series that doesn’t have HDMI output available. It looks like a normal netbook, but screen can rotate so that the screen can be on top of the laptop and become more like a tablet. It is also the only tablet that is available in more than just one color (Blue, Red, Black).

So are you guys as excited about these tablets as we are?

During the Sony E3 press conference, Sony has just announced … 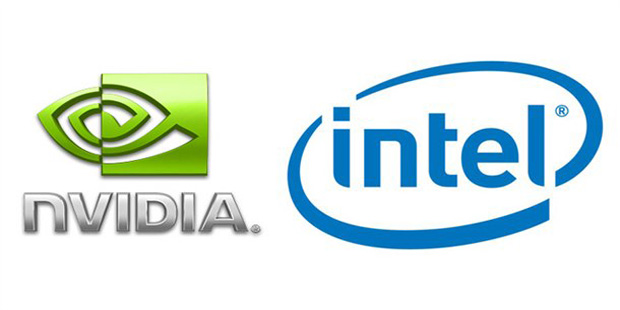