Genius’ ambidextrous gaming mouse is a godsend for left handed PC gamers, but even righties will find a lot to like about it.

Being left handed used to be pretty rough: in previous generations, left handed kids were forced to learn how to write with their right. In the Middle Ages, left handed people were believed to be under the influence of the devil. Some cultures still believe that your left hand should only be used to handle “unclean” tasks, such as wiping your rear after a taco binge. Thankfully, most of the stigma attached to left handedness has faded in the modern era, and nowadays we simply judge people by their race, class, religion, and appearance, not by which hand they use to write. Isn’t modern society grand?

Of course, not everybody treats lefties with the respect they deserve — the designers of gaming mice seem to forget that left handed people comprise about ten percent of the human population, so they design their products exclusively for righties. Left handed people no longer need to fear being chased out of town for fear that they’re the source of the plague, but they still can’t get any love when it comes to gaming peripherals.

Peripheral manufacturer Genius has taken a stand against this unjust hand-ism by creating the X-G510, an excellent gaming mouse that performs well and feels comfortable no matter what hand you use. 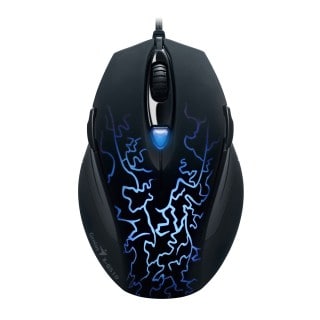 The X-G510 has all the standard features you’ve come to expect from a modern gaming mouse: adjustable DPI (ranging from 500-2000 DPI,) programmable macros, rubberized grips, two programmable “thumb” buttons, etc. Unlike most gaming mice which place all the extra buttons on the right side of the mouse, the X-G510 places its customizable macro keys on both the right and the left sides of the mouse, meaning that both righties and lefties can get equal use of the mouse’s special features. Regardless of which hand you use, the X-G510 fits comfortably in your palm, and most of the buttons are easy to reach, with the one exception being the DPI switch, which is located in a recessed nook behind the scroll wheel. Then again, that’s the one button that you wouldn’t want to press accidentally in the middle of a firefight anyway, so perhaps that’s a good thing.

While there are other gaming mice out there that go up to 6000 DPI, the X-G510 manages to perform admirably with its 2000 DPI: movement felt smooth and precise, and I was able to snipe accurately in games like Team Fortress 2 with it. Overall, the mouse felt quick without feeling “jumpy,” and it was accurate without feeling overly sensitive — basically, it always worked the way it was supposed to. The included software also allows for quick and easy programming of macros.

Aesthetically, the X-G510 is sort of a mixed bag: some friends of mine thought it looked pretty cool, but I thought that the mouse’s glowing LED lightning bolts made it look like something that Guy Fieri would wear. I understand that I’m probably in the minority when it comes to judging things like this, as most other PC gaming peripherals are similarly branded with glowing bits and flame patterns and such, so obviously a lot of gamers like that kind of thing. Thankfully, if you don’t like how the glowing lightning design looks, you can turn it off with the mouse’s included software — with the LEDs off, the mouse actually looks pretty classy and sleek.

The best part about the X-G510 is its price: with an MSRP of just $35, Genius’ offering is a fair bit more affordable than most of Logitech and Razer’s mice, and it offers comparable performance.

With it’s ambidextrous design, its low price, and its solid build quality and performance, the X-G510 comes highly recommended. The hard to reach DPI switch aside, it’s simply one of the best gaming mice you can buy for less than $50, and it should be considered required equipment for anyone who prefers to keep their mouse on their left.