EA is about to take the stage at E3 2013; so join me as I live-blog all the highlights, then follow up with a recap and all the latest trailers shown throughout the presentation. We’re expecting to see the latest footage of Battlefield 4 multiplayer (rumor has it the multiplayer will feature 64-man online play,) as well as details about Dragon Age 3: Inquisition and a new Mass Effect project. Of course, EA Sports will have something to show off as well. Plus, now that EA is the exclusive publisher of Star Wars games, we just might hear some news about that good ‘ol galaxy far, far away.

Opens with a debut trailer of Plant Vs. Zombies: Garden Warefare
John Vechey comes on stage to discuss the game.

Respawn Entertainment takes the stage to show off more Titanfall footage with a new trailer.

Frank Gibeau comes on stage to discuss the new software engines that EA can create on next-gen platforms.

Time for the EA Sports segment

Cam Weber discusses Madden 25 on Xbox One and PS4

DICE heads to the stage to show off Battlefield 4 footage

DICE shows off a reveal trailer for Mirror’s Edge 2, coming “when it’s ready.”

Peter Moore closes out the show by announcing the playable demos available on the show floor; including Battlefield 4, Need for Speed: Rivals, and the EA Sports titles running on the Ignite engine.

EA just wrapped their press event, and while there weren’t too many surprise, they showed a strong lineup of titles coming to next-gen. The unusual-yet-adorable Plants vs Zombies: Garden Warefare looks very promising, and was actually one of the highlights of the event, especially for folks tired of the constant sequelitis. Yes PvZ is not a new IP, but this totally out-of-genre experience keeps things fresh.

Obviously, the biggest news of the announcement is that DICE is in fact making a new Star Wars: Battlefront game. (Which I totally called, by the way.) No news on a release date or features were provided, and it’s unlikely the game will debut before 2015, but it’s nice to know that we’ll finally see an authentic Battlefront experience coming to next-gen, running on Frostbite 3 to boot.

EA had a great event, showing off just a tease of anticipated titles such as Dragon Age III: Inquisition and Mirror’s Edge 2. While there weren’t any jaw-dropping surprises, it’s nice to know that EA is creating a mix of strong sequels and quality new products.

Keep it here at IGXPro, as we still have presentations coming from both Ubisoft and Sony. E3 hasn’t even officially begun yet, so there’s still plenty of news to come all week long. If you want to keep up with all of the action on the go, be sure to like IGXPro on Facebook, follow us on Twitter, or give us the ‘ol +1 on Google+. 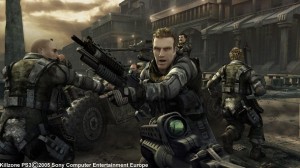