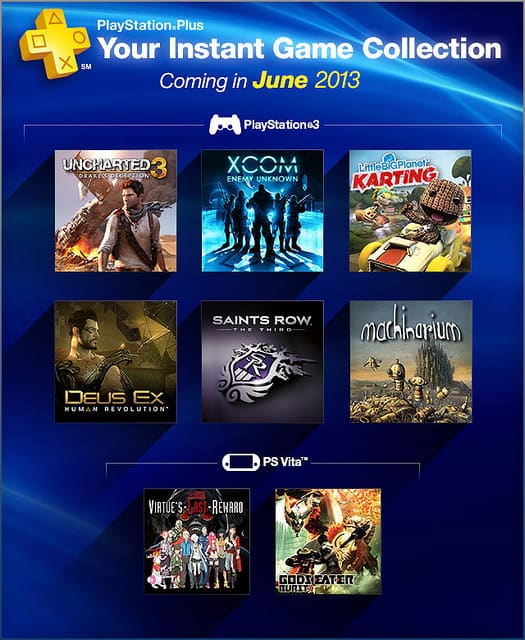 inFamous 2, LittleBig Planet 2 and Ratchet and Clank: All 4 One are being cycled out of PS Plus’ “Instant Game Collection” in a few days, but they’re going to be replaced by three more big titles: Sony’s Uncharted 3 and LittleBig Planet Karting, as well as 2K Games’ XCOM: Enemy Unknown.

All three titles were released last year to mostly positive reviews, so they’re definitely worth the cost of a PS Plus membership (and the unusually long amount of time it takes to download anything over PSN) to play.

These three games are the latest titles to join Sony’s “Instant Game Collection,” a selection of games that are “free” to download for PS Plus subscribers. Last week, Sony also added Deus Ex: Human Revolution to the service. There’s more to come, too: in the coming weeks Saints Row: The Third, Machinarium, Gods Eater Burst (PSP,) and the excellent visual-novel Zero Escape: Virtue’s Last Reward for Vita will also join PS Plus’ selection of “free” games. The Playstation Blog mentions that they’ll have even more to announce regarding PS Plus bonuses after Sony’s E3 press conference next week.

I’ve been pretty satisfied with my Playstation Plus subscription so far — I hate paying monthly fees to access services on my console (I recently let my Xbox Live subscription lapse,) but the amount of free(-ish) games and discounts PS Plus has given me has more than balanced out the subscription fee. I don’t want to sound like an advertisement, but if you play as many games as I do, then PS Plus really does pay for itself.

Uncharted 3, XCOM, and LittleBig Planet Karting will be available when the PSN Store updates next Tuesday.

Street Fighter IV is in need of some rebalancing, and …

Some big changes might be in store for Sony, as …