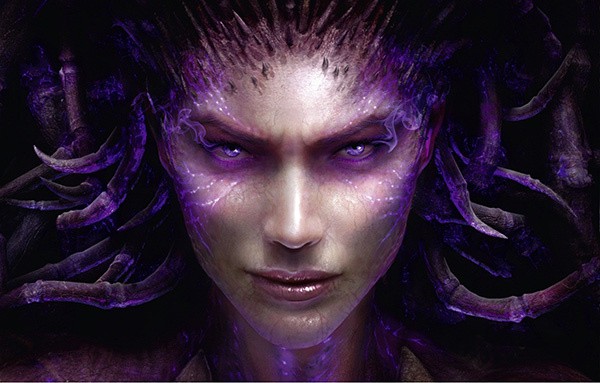 If you’re into Starcraft, chances are you’ve already bought the latest expansion pack. If you’re not into Starcraft, well, now is a good time to jump in, because Starcraft II: Heart of the Swarm makes getting addicted to Blizzard’s flagship RTS even easier than ever.

Starcraft II: Heart of the Swarm’s campaign picks up where Wings of Liberty left off: the series’ hard drinking hero, Jim Raynor, has finally managed to turn Kerrigan, the infested leader of the Zerg, back into a human. Despite losing her ability to control the Zerg swarm, Kerrigan is still wants her revenge against Arcturus Mengsk, the leader of the Terran Dominion and an all-around asshole. Raynor pleads with her to give up her self-destructive quest, and he tells her that the two of them should simply run away together and leave the war behind. Kerrigan refuses, saying that she still has too much to do to run away now.

That’s sort of how I felt while playing Starcraft II: Heart of the Swarm; friends and family would tell me to get off the PC and go do something productive, and I’d shoo them away. I’ve ordered all my meals to go so that I could eat them in front of my computer. My poor dog has spent the last few hours running around in circles because he’s full of energy and nobody wants to take him out for a walk. Of course, I can’t be bothered to get up from my computer chair right now, because like Kerrigan, I simply have too much left to do before I can leave the world of Starcraft II: I still have achievements and rewards to unlock in the campaign, I need to build up my Swarm levels for the Terrans, and… Oh!  Some of my Battle.net buddies just signed on and want to play a match. Sorry dog, but you’re going to have to flash those puppy-dog eyes at somebody else if you want to go for a walk.

Blizzard has stated that while Heart of the Swarm is technically just an expansion pack for the original Starcraft II, they consider it a full sequel due to the game’s extended development time and the amount of content available in the game. After spending the last week playing through the campaign and logging a dozen hours into its multiplayer mode, I have to agree with them — Heart of the Swarm is loaded with so many new things to do and so many fundamental changes to SC2’s gameplay that it makes other expansion packs look like minor patches by comparison.

Nothing exemplifies this better than HotS’s fully featured campaign: while it still features all the things you’ve come to expect from Starcraft campaigns, such as tightly designed levels and a schlocky story, HotS adds some new features that make it feel significantly different from Wings of Liberty.

The most notable change is Kerrigan herself: while hero units in previous Starcraft games were just reskinned or powered-up versions of standard units, Kerrigan is completely unique. She sort of works like the heroes from Warcraft 3: she gains levels as you complete bonus objectives, and she gains new powers and abilities as you progress through the campaign. While she starts off with relatively weak and with a basic skill set, she eventually becomes the core of your army: she eventually deals more damage than most of the other units in the game, she can heal and buff surrounding allies, and she even gains some powerful area-of-effect attacks that can wipe out entire bases. The game encourages you to use her aggressively, since Kerrigan can’t die: if she runs out of HP, she simply respawns at your original Hive. HotS’ campaign almost feels more like Diablo than Starcraft at times, because once you get good at micro-managing Kerrigan’s abilities, you can almost wipe out entire enemy armies and bases using just Kerrigan alone. It makes sense that’s she’s so overpowered since she’s portrayed in the story as one of the most powerful beings in the Starcraft universe, and you begin to rely on her so much that you’ll feel naked in the handful of missions where you don’t get to use her. 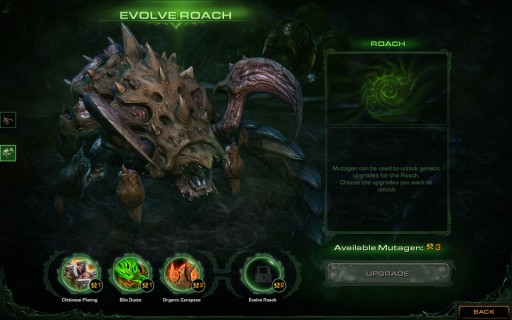 Of course, while Kerrigan is definitely the focus of the campaign, she wouldn’t be anything without a Zerg swarm to command. Just like Kerrigan, your individual Zerg units grow and evolve over time: in addition to swappable, minor upgrades that give your swarm increased attack power, speed, or the ability to regenerate their HP over time, the game also gives you the ability to permanently evolve each species of Zerg for more drastic upgrades: for instance, you can evolve Zerglings that can leap up cliffs (a-la the Terran’s Reapers,) or you can instead choose to spawn Zerglings that hatch three at a time from each egg, allowing you to set up Zerg rushes even faster than normal. The evolutions eventually give you some amazingly powerful and useful units, like Hydralisks that can take out Siege Tanks in a single strike, or Ultralisks that can revive and rebuild themselves upon death. The campaign gives you access to a lot of units that would be completely broken and overpowered in the multiplayer game, but are a lot of fun to mess around with in a PvE setting.

The ability to customize both Kerrigan and her swarm is a lot of fun, and after I beat the campaign the first time I went back and immediately started a new game, just so I could mess around with the different Zerg evolutions that I didn’t get to try on my first play-through.

The variety of the species in the Zerg swarm is only matched by the variety of the missions that HotS throws at you. Out of the 20+ missions in the game, there’s only maybe one or two missions that are just straight battles: the rest of the missions in the game all feature some sort of unique goal or gimmick that keep the campaign from feeling like a series of simple skirmish matches. For instance, one mission has Kerrigan racing against a rogue Brood Mother to collect Zerg eggs, while  in another mission you have to infest an entire capital ship using just a single, vulnerable Zerg parasite. 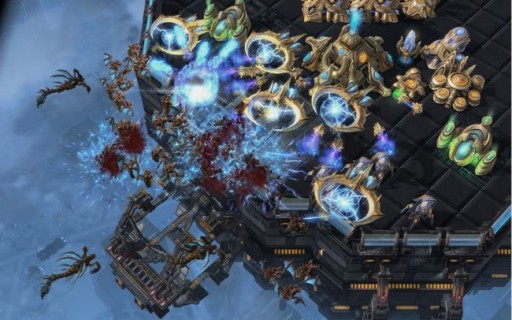 Despite being a direct continuation of Wings of Liberty’s story, the missions in Heart of the Swarm are surprisingly newbie-friendly. The early missions do a good job of explaining the basic mechanics of Starcraft, and a lot of the missions in the game are focused around teaching you have to use a specific unit properly. While newbies probably won’t understand what’s going on in the story if the start with HotS, the game definitely does a better job of easing new players into the series’ deep and sometimes obtuse mechanics than previous games.

Unfortunately, this accessibility is a double-edged sword, as Starcraft veterans may find themselves wishing that HotS was a little more demanding. I’m no Starcraft pro or anything (I’ve never even made it to Gold league,) but Heart of the Swarm’s campaign, while fun, will definitely feel like slow-pitch softball to anyone who’s already completed Wings of Liberty’s campaign. I failed missions repeatedly and only barely survived Wings of Liberty’s final mission on Normal, but I was able to clear Heart of the Swarm’s campaign without a failing a single mission once. Regardless of what difficulty you play on, HotS is always going to feel easier than it’s predecessor: the game always points you towards your next goal (even revealing the map locations of enemy bases on a few occasions,) and sometimes the game even tells you exactly what units you should be using to best complete each objective. While the AI will pull off some more advanced maneuvers on the harder difficulties, such as pulling drops into your mineral line, anybody who’s played an RTS before should have no problem clearing HotS’ campaign with only a modicum of effort, especially once you get Kerrigan and your Swarm leveled up. Despite the patronizing level of difficulty, the campaign still somehow manages to be fun, but it is still kind of odd that expansion pack is easier than the main game.

Of course, the campaign is just one half of what makes Starcraft so great. There’s probably more people out there buying Heart of the Swarm for the multiplayer than the campaign, and those people won’t be disappointed: Starcraft is still regarded as one of the best multiplayer RTS’ ever made, and Heart of the Swarm is a good reminder of why that is.

The new units in Heart of the Swarm are a lot of fun to mess around with: the powerful Mothership Core finally gives Protoss players the ability to apply some early game pressure, and the Viper’s Blinding Cloud ability (which causes the range of all units caught within its area of effect to drop to zero,) gives the Zerg an effective counter to swarms of ranged units. There are few things more satisfying that taking out a group of your opponent’s army with a Widow Mine, or plucking a Siege Tank out off the high ground using the Viper’s Abduct ability. While there are only 7 new units in Heart of the Swarm, all of the new units have multiple uses and creative players are already figuring out clever ways to put them to use.

Pro-players are still developing new strategies (and counter-strategies) involving the new units and the re-balanced old units, so it’s too early to tell if Heart of the Swarm retains the impeccable balance that made earlier versions of Starcraft so special: there seem to be a lot of complaints on the internet right now that, at least on a pro-level, Terrans are slightly overpowered and the Zerg aren’t as strong as they used to be. But despite whatever balance issues there may be (issues which will undoubtedly either get patched or nullified by new, emerging strategies,) there’s no denying that Heart of the Swarm’s multiplayer is still a lot of fun and is still just as addictive as ever.

Newbies don’t need to feel intimidated either. The campaign’s accessibility also filters over to the multiplayer mode, which now features additional tutorials to teach things like basic build orders and tech trees to new players. Battle.net’s matchmaking remains top-notch as well, as the game does a good job of matching you with players of a similar skill level, so you generally don’t need to worry about being matched against some pro-level Korean player while you’re still learning the ropes. Of course, you’ll still run into the occasional douche who will quit a match as soon as it starts (so they can game their ranking level,) but that’s not really the game’s fault.

If you were already into Starcraft or RTS’s, then getting Heart of the Swarm is a no-brainer. While the ease of the campaign puts a blemish on what would’ve otherwise been a perfect product, let’s face it: if you’re a Starcraft veteran, you were always going to find your challenge in the multiplayer (which is as good as ever,) not the single player. Meanwhile, if you’re a newbie, Heart of the Swarm’s easy campaign and copious tutorials make it the ideal introduction to the series. There are parts of Heart of the Swarm that won’t satisfy everybody, but the game offers so many different things to do that everybody is guaranteed to find some part of the game to love.