Latchkey Games is a weekly column that takes a look at games that perhaps didn’t quite get the amount of love they deserved: whether it was a game that was panned on its initial release only to become a cult classic, one that stirred the ire of series fans, or simply a game that fell through the cracks and was forgotten by time or overshadowed by a more popular release. This week I’ll take a look at Treasure’s Sin and Punishment: Star Successor, an incredibly hardcore and painfully overlooked 3D scrolling shooter.

Of course, the Wii’s reputation of having “no good games” is a little exaggerated: while the system was flooded with more than its fair share of garbage, over the last few years the system has managed to accrue a pretty respectable selection of quality, core-focused titles. Of course, there’s the obvious first-party titles like Super Mario Galaxy and Zelda: Skyward Sword, but there were a handful of great third party games for the Wii as well, such as Vanillaware’s excellent action RPG Muramasa: The Demon Blade (which is being ported to the Vita, another system which gamers seem to love to look down on.)

But like I said earlier, a lot of gamers look down on Wii games, even the handful of good ones, with a hipster-like sense of elitism and self-satisfaction derived from the idea that they’re “too hardcore” to play a Wii game, so developers were rarely rewarded for creating a quality Wii game: some of the system’s best games are also its worst-selling titles. Take Nintendo’s own Rhythm Heaven Fever for instance: despite being released to glowing reviews and at discounted price, the game reportedly managed to sell less that 50,000 units in its first month on store shelves. 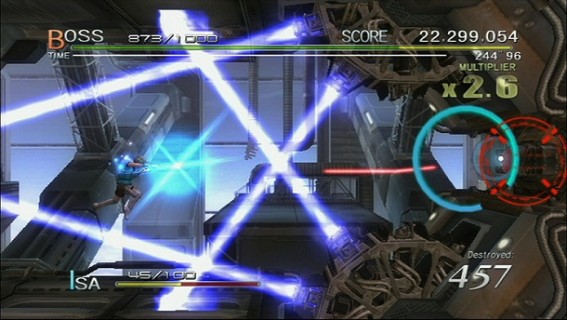 Today’s Latchkey Game is a similar story. Sin and Punishment: Star Successor is an auto-scrolling, 3D shooter a-la Star Fox or Panzer Dragoon. It was created by Treasure, the acclaimed Japanese development studio behind hardcore classics like Gunstar Heroes, Radiant Silvergun, and Ikaruga. It’s the direct sequel to a Japanese N64 game that attained a near legendary reputation from importers. But despite its developers’ pedigree and the tons of hardcore cred that the game should have had, Sin and Punishment: Star Successor was completely ignored upon its release, mostly because it was on the Wii and a lot of supposedly “hardcore” gamers assumed they were above playing a game on Nintendo’s “casual” toy.

The Wii may be a casual system, but Star Successor is anything but a casual game. The basic gameplay is similar to Star Fox: your character automatically flies forward through the stage, and you have to fight your way through a swarm of enemies while dodging various environmental obstacles. The big difference between Star Successor and Star Fox is that your character can move and shoot in two different directions: the analog stick on the nunchuk controls your movement, while the Wii-mote’s pointer controls your aim. I know a lot of hardcore gamers have an aversion to motion controls (and rightfully so, considering how badly most games implement them,) but Star Successor is one of those rare instances where the motion controls actually make the game better instead of just turning it into a “waggle”-athon or a gimmick.

You can play Star Successor using a Wii Classic Controller or a Gamecube controller, but the game is actually significantly harder (and significantly less fun) with traditional controls. The Wii-mote in this game basically works like mouse-aiming does in a PC shooter; moving the controller with your wrist drags your aiming reticule around the screen, and unlike a lot of other Wii games, the game does a perfect job or accurately tracking your movements. You can shoot an enemy, then pop another baddie on the opposite side of the screen in a split second without having to wait for your character to turn or your reticle to pick up speed. The game was obviously designed with these split-second reactions and pixel-accurate controls in mind, and some of the more challenging parts in the game are nigh-impossible to beat using the slower traditional aiming controls.

Not that the game is easy with the Wii-mote controls, either: like Treasure’s other classics, Star Successor is a genuinely challenging game that is definitely not meant for casual gamers. The screen is constantly flooded with bullets and obstacles, and the game’s rapid pacing never lets up for a second: even the easiest levels in Star Successor or comparable to some of the hardest levels in Star Fox or Panzer Dragoon. Despite the brutal difficulty, the game never feels unfair: the game telegraphs every attack and obstacle that it tosses your way, but whether or not you have the reflexes to dodge them is up to you. Star Successor is one of those games that isn’t afraid to kill you over and over again, but each time you replay a level you can actually feel yourself getting better and just  managing to get a little further into each stage with every life feels genuinely rewarding.

In true Treasure fashion, the game does an excellent job of mixing up the action: some levels are played from a side-scrolling perspective, while other stages stick you in a vehicle for some high-speed chases. While the core gameplay is always focused around dodging and shooting, almost every level in the game adds a new twist or variation to the standard formula: half the fun of the game is seeing what surprises or insane situations the game will throw at you next. It’s honestly the most creative and surprising game that Treasure has put out since the original Gunstar Heroes on the Mega Drive/Genesis.

Of course, Sin and Punishment isn’t without it’s problems. While nobody should expect a Wii game to feature cutting edge graphics, Star Successor’s presentation is a little uneven: some stages and bosses look great by any systems’ standards, while other parts of the game look like they were directly pulled from an N64 game. The game is also pretty short once you know what you’re doing, but the brutal difficulty keeps it from being the kind of game that you’ll be able to beat in one sitting or over a weekend.

Sin and Punishment: Star Successor was originally published by Nintendo in 2010 for the Wii. You can still find new copies of it on Amazon for about $12.