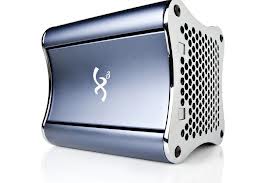 Okay, so Xi3’s upcoming modular PC, codenamed the “Piston” isn’t Valve’s Steam Box console. But Xi3 is one of the hardware manufacturers that Valve has tapped to produce their upcoming set-top box, so a lot of people are assuming that the Piston will give us a good preview of what to expect from Valve’s still mysterious “console.” Today at the SXSW event in Austin, Texas, Xi3 divulged a few more details about the Piston, including its price.

The basic Piston model, which includes a 128GB solid-state harddrive, will retail for a hefty $999.99. The Piston will feature a proprietary UI that can be fully customized by the user. SXSW attendees can get a $100 discount if they pre-order the micro-PC from Xi3’s booth.

While the Piston was originally touted as Valve’s Steam Box at last January’s CES, Valve has since clarified that a version of the Piston is merely one of several possible Steam Box prototypes that the company is currently experimenting with. It’s worth emphasizing that while Xi3 is one of Valve’s partners in their Steam Box project, there’s still a good chance that the final Steam Box may end up being quite different from the Piston.

With that said, while the Piston is a neat looking piece of hardware, I kind of hope that Valve finds a cheaper alternative to base their Steam Box on — $1,000 is a lot of money, and for that price you could buy 2 (or 3) dedicated consoles or you could simply build your own PC for substantially less.

The Xi3 Piston will be available this holiday season, so if you’re interested, you’re better start saving up some cash now.

As is a common practice for highly-anticipated titles, Dark Souls …

During the madness of GDC news last week it was …