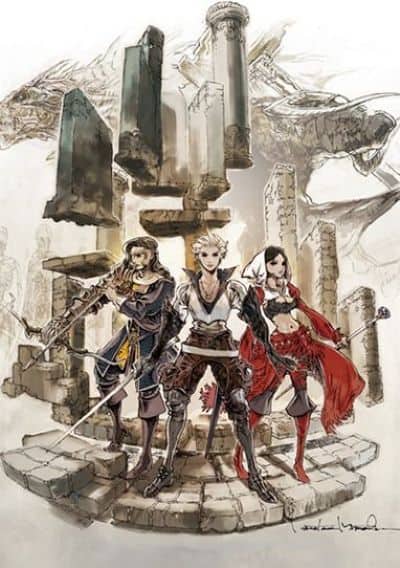 Crimson Shroud doesn’t have a massive open world, a 100-hour long story, or movie quality pre-rendered cutscenes with professional voice acting. Hell, the game doesn’t even feature any real animation. Crimson Shroud is missing a lot of the features you’d expect from a modern RPG, and that’s precisely why the game is so interesting and refreshing.

Nowadays, people expect a lot from their RPG’s. They have to feature a giant, sprawling world loaded with sidequests, customizable characters, and a story line that changes depending on your choices. They need to be released in special edition packages that come with a mini art book and some kind of tacky statue. They need to have a theme song sung by some Japanese pop-star and they need to be released alongside a line of licensed action figures representing all the main characters. They have to have complicated battle systems that require continuous tutorials that pop up throughout the game, online co-op modes, and they need to be at least a hundred hours long (not counting DLC.) To have anything less is unacceptable by modern standards.

Of course, things weren’t always like this– I grew up during the 8-bit era, during the age of the original Final Fantasy, Phantasy Star, and Dragon Quest, back when RPGs featured simple stories and even simpler graphics. I’ve probably played hundreds of RPGs, both Japanese and Western developed, on both PC and consoles, since then, and while I still love modern RPG’s (I sunk hundreds of hours into games like Skyrim, Tales of Graces F, and Xenoblade last year,) but sometimes I long for the days when RPGs were accessible, quick diversions that didn’t require hours of tutorials or a dedicated wiki to explain all the character relationships.

The developers of Crimson Shroud obviously felt the same way too, as CS sheds a lot of the modern excess that contemporary RPGs revel in. It casts aside all expectations of what a modern RPG should be in favor of recreating a style of game that predates even the earliest video role-playing games: Crimson Shroud is a loving throwback to the age of pen and paper RPG’s, complete with dice rolls and representations of pewter figurines and hand drawn maps. Crimson Shroud sheds all of the pointless baggage that’s been added to the genre over the last twenty-five (or so) years, and while it’s based around a style of RPG that predates even my experience with the genre, the game’s simple charm and retro mechanics managed to remind me of all the reasons why I got into RPG’s in the first place. 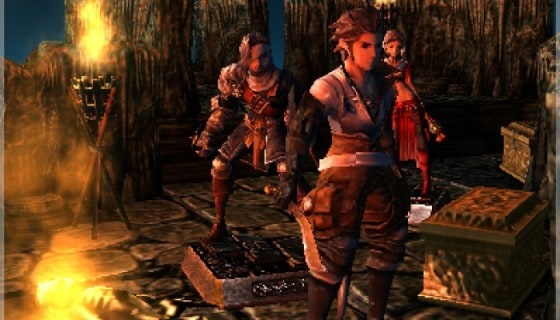 Crimson Shroud tells the story of Giauque (no, I don’t know how you’re supposed to pronounce that,) an experienced “Chaser” — basically a mercenary who specializes in tracking missing persons or lost treasure — who bites off more than he can chew when he accepts a contract involving the titular Crimson Shroud, an ancient relic that is supposedly the source of all magic in the world.

The game was designed by Yasumi Matsuno, the role-playing genius who helmed most of Square-Enix’s “Ivalice” games, such as Vagrant Story, Final Fantasy Tactics, and Final Fantasy XII. Since Matsuno quit Square, CS isn’t set in the same continuity as all of his previous games, but it’s definitely similar in tone and presentation; Matsuno continues to avoid the tired cliches and tropes that other J-RPG developers are seemingly content to recycle over and over again, and just like Vagrant Story or FF Tactics, Crimson Shroud offers slightly more mature and more nuanced storytelling than your average J-RPG. Instead of focusing on some cheesy love triangle or the characters’ angst over their tragic pasts, Crimson Shroud’s story hooks players with the mystery surrounding the titular artifact and the political machinations of the various organizations that want to control it. The story is told mostly through text and static images, which will definitely be off putting to a lot of modern gamers, but the text itself was well written enough that I found myself immersed in CS’s world, even without any visual stimuli.

Visuals are mostly an afterthought in terms of the actual gameplay as well: the visuals interpret the whole tabletop RPG thing pretty literally, as the characters look like painted miniatures who never animate besides wobbling a little when they attack or take damage, and the world you explore is mostly represented by a hand-drawn, overhead map.

The combat is suitably retro as well: while the game automatically calculates damage and accuracy for basic attacks, special abilities and magic spells require dice rolls to determine their effectiveness. Lots of modern games still have mechanics based around simulated dice rolls, such as Fallout or Skyrim, but most of the time these games let the computer handle these calculations behind the scenes and players generally don’t have to worry about them. In an incredibly charming touch, Crimson Shroud actually makes you manually roll the dice yourself by dragging and flicking them across the 3DS’ touch screen. It’s a small touch, but it goes a long way into actually making you feel like you’re actually playing a tabletop RPG campaign rather than a videogame.

While the battle mechanics are simple and easy to understand, Crimson Shroud isn’t an easy game. Crimson Shroud’s enemies are tough: instead of throwing a constant horde of brainless, cannon-fodder type enemies at you, the game only forces you into combat at specific points, and every enemy encounter requires your full attention as even basic enemies can decimate your party within a few turns. Dice bonuses are given to the player if they can chain attacks together in a specific sequence, so the game encourages you to plan out your strategy ahead of time instead of simply spamming the same attack over and over again.

The game generally succeeds in feeling like an excellently put-together D&D session, but Crimson Shroud isn’t without it’s flaws: there’s a point in the game where you need a specific item in order to progress to the next area, but  the only way you can get that item is by picking it up as a random drop from a defeated enemy. Some players get the item on their first battle with this enemy, while other players have had to grind for hours in order to get it to drop. It only happened to me once over the course of the game, but still, it’s a strangely sloppy design choice in an otherwise impeccably polished and thoughtfully designed game.

Crimson Shroud’s other big flaw is its length: while the game is certainly meaty enough to warrant its meager $8 price, it definitely left me wanting more. The game almost feels like a demo or the prologue chapter of what could have been an episodic series, and while the game feature an unlockable New Game Plus mode with extra areas to explore, even the most dedicated of gamers will be hard-pressed to get more than 10 hours of playtime out of Crimson Shroud. If modern RPGs have a level of content akin to a buffet, then Crimson Shroud is their retro-themed appetizer.

But at the end of the day, I suppose it’s better that Crimson Shroud left me wanting more rather than out-staying it’s welcome with a 100-hour quest filled with a filler material and busy work. While it’s hard to not feel a little blue-balled at the game’s length, but it’s still definitely worth your $8. Crimson Shroud is a good reminder that RPGs (and games in general, really,) don’t need multi-million dollar budgets in order to be entertaining, memorable experiences.