Yesterday, we reported about the recent layoffs happening at IGN due to Ziff Davis Media’s corporate restructuring. In addition to the layoffs, we were also informed that 1UP, GameSpy, and UGO would be shutting down entirely. Now, soon-to-be-former editor-in-chief of 1UP Jeremy Parish has posted a farewell letter to the site’s loyal and passionate fanbase.

According the Parish, he considers his explanation to be the “human version” of the story. What follows is a large portion of his letter:

“As of today, 1UP will be entering the sunset into which all former websites eventually must ride. This comes as huge disappointment for me — not because I’m editor-in-chief of the site, but because I’ve been with it since the beginning. That’s nearly 10 years of my life invested in this website through all its ups and downs… and ups… and dooooowwwwwns.

It’s been a fantastic (almost) 10 years. Even in its most frustrating and even dispiriting moments (there were some pretty dark times before IGN bought us in 2011), 1UP has always been fueled by the sincere enthusiasm of everyone writing for the site. Dozens upon dozens of people have moved through the various doors of our assorted offices, and each of them brought passion and talent to their work. I’m proud to have been a part of something so much larger than myself, and to help guide it as gracefully as possible to its slow halt since taking over the role left behind by my predecessors, Sam Kennedy and James Mielke.

Read through the site’s archives and you’ll find some truly amazing content. In-depth interviews with legendary developers, insanely detailed explorations of the niche and obscure, brilliant coverage of the top news of the day. You’ll find revolutionary video programs and trendsetting podcasts. Incisive reviews and comprehensive blogs. God, there’s so much here we need to archive in case someone does pull the plug on the servers.

But most of all, 1UP has always been fueled by passionate readers. No, you guys are more than readers — you’re participants. You’ve called in for podcasts, shaken our hands at trade shows and conventions, flagged us down on the street, berated us in comments, and chimed in to express your own take on the topics of the day. 1UP has played a huge role over the years in changing the perception and nature of the gaming press from broadcast to conversation. And the outpouring of memories and affection today on forums, on Twitter, and in our blogs has only served to reinforce the impact 1UP has had on countless people. You guys are awesome.

Of course, the comments have also served to reinforce that most people have regarded recent 1UP as a mere shadow of its former self. And, well, yeah. My instinct is to kick myself for helming 1UP as it’s gone down, but honestly I can’t imagine what any single person could have done to change the way things have gone — or even what a team could have done, for that matter. 1UP has fallen victim to the same industry-wide malaise that’s affecting practically everyone out there: The games industry continues to evolve in ways that have marginalized the press. Everyone’s out here is trying to scrape by, and 1UP simply had the ill fortune to be a secondary concern for its past few owners. Everyone who has taken hold of 1UP, I sincerely believe, has done so with the best of intentions — but when the market turns down, as it has consistently ever since that foolish boast about it being a recession-proof industry, the belts tighten and the lion’s share of attention goes to the first child. We had great plans for 1UP when the site came aboard at IGN… but those ended up being pushed further and further back as the online ad market took turn after turn for the uglier. 1UP has been the nephew living in the cupboard beneath the stairs for years now; alas, no one came along to proclaim us secretly a wizard and take us to a magical kingdom.

Although come to think of it, Tim, the dude who hired me back in 2003, was initially described to me as looking like “a smaller version of Hagrid.” I guess we went about it all backward.

Realistically, though, we’ve been staring in the face of a possible shutdown for a while. I haven’t been happy about it, but I don’t think any of us have been gloomy or defeatist, either. Instead, Jose, Bob, Marty, and I have done our damnedest to continue fighting the good fight for creative integrity, honest editorial, and a feature-heavy focus that eschewed rote news coverage in favor of more (we hope) meaningful fare. And, honestly, things had been going pretty well of late; despite the fact that the site (which lost the one engineer who knew how to maintain and improve it more than a year ago) has had no feature additions or fixes in ages, despite having had its staff reduced to about 1/10 of what it was in its prime, we’ve kept 1UP’s traffic ticking away at a respectable rate. More importantly, at least to me, is that the 1UP community has really been rallying and coming together in the past few months. Our articles have been pulling in some of the best reader commentary I’ve seen anywhere on the Internet. A tightly knit (and growing) core blogger group has continued to write, collaborate, sympathize, and interact behind the main page of the site.

We still have a number of articles in the works for 1UP — things that wouldn’t quite fit on IGN, having been developed for 1UP’s particular mandate. For instance, reviews of games that are already being handled by existing IGN staff. I’ll be taking up a mantle over at IGN pretty much immediately, but we’ve paid for and invested time in a handful of cool 1UP articles. I figure they can be 1UP’s swan song? Eventually, we’ll stop updating the site, but until then I think it would be nice to make sure the “Latest Updates” and “Hot on 1UP” modules on the front page are crammed with great content until they pull the plug on the servers at last.

This has been a tough pill to swallow (even tougher in light of losing Bob and Jose altogether, along with some incredibly talented friends at IGN and Gamespy), but your outpouring of memories and affection have really brightened up a bleak day. Thanks to everyone who’s ever read, watched, listened to, or commented on 1UP content over the years. Thanks to everyone who’s ever taken part in the site, whether as an editorial contributor or a fan.

I’d be lying if I said I knew what the long-term plan for 1UP is, and much as it pains me to say it I think it’s probably a pretty bad idea for you bloggers to continue posting here. Back up your content! Feel free to transplant yourselves to IGN, where I intend to be just as active and hands-on with the community as I’ve been on 1UP. And if you don’t want to do that, start blogging somewhere.

In the meantime, if you have any thoughts you’d like to share, whether you’re a reader, a contributor, a publisher, or a developer, or just a friend, feel free to drop me a line at jparish@ign.com. Thanks again, and I hope to see you soon under a different trademark.”

And so ends the glorious reign of a wonderful game news site. Many of the fans have expressed great disappointment in the loss of 1UP’s unique features and editorials, as well as the popular Retronauts podcast and their dedicated coverage of retro games. With any luck, the talented crew won’t be jobless for long, and I wish them all the best as they transition through this difficult time. 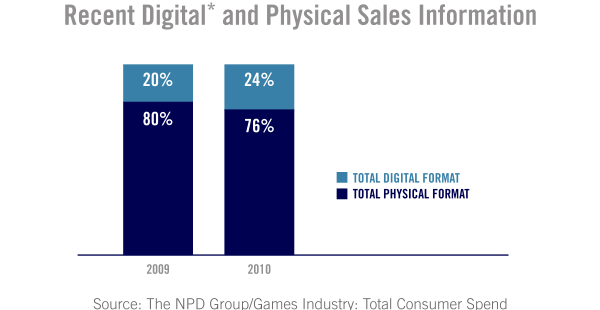 According to the Entertainment Software Association (PDF), the sales of …

The jokers over at Epic games decided to release a …