Tokyo Crash Mobs’ cute and quirky presentation will make you smile, but actually playing the game itself will make you want to throw your 3DS against a wall.

Good puzzle games and successful handhelds go together like peanut butter and jelly: the PSP had Lumines, the original DS had quality puzzlers like Planet Puzzle League (a.k.a. Tetris Attack) and Meteos, and of course, the original Game Boy launched alongside what is still probably the most popular version of Tetris. The 3DS has already seen its fair share of great puzzle games, such as the excellent Pushmo and its sequel, Crashmo, and I was hoping that Nintendo’s latest puzzler, the bizarre and quirky Tokyo Crash Mobs, would become my latest addiction, but unfortunately, it hasn’t: rather, it’s become one of my most regrettable e-Shop purchases in recent memory.

I know that sounds harsh, and trust me, I’m as surprised as you are with how little I enjoyed this game. I’m the type of guy who loves intentionally wacky, insane games like Katamari Damacy and No More Heroes, so I was sold on Tokyo Crash Mobs as soon as I saw one of the game’s ultra weird, live action FMV cutscenes. If nothing else, TCM at least manages to nail its presentation: everything about the game’s aesthetics, such as the digitized, Mortal Kombat-esque sprites that populate each level, to the game’s various menus (which are all just as strange,) will make you smile from just how gloriously absurd it all is. Tokyo Crash Mobs absolutely revels in its own weirdness, and it’ll probably win a lot of people over with its charm alone.

Unfortunately, games can’t succeed solely on charm, and Tokyo Crash Mobs spends so much time trying to be cute and funny that it seemingly forgets it should also try to be a good game as well.

Tokyo Crash Mobs’ gameplay should be familiar to anyone who’s played PuzzLoop (a.k.a. Magentica, also developed by Mitchell Corporation,) or its shameless but more popular knockoff, Zuma: colored puzzle pieces loop around a preset path, and your goal is to eliminate each piece by shooting additional colored pieces into the path, causing them to disappear when three or more of the same color is matched up. Of course, in TCM you’re not eliminating puzzle pieces but Tokyo “scenesters” (hipsters, basically,) who wear color-coded outfits.

The game features two characters, Grace and Savannah, each of whom plays slightly differently: Grace is charged with working her way to the front of a long line of scenesters so that she can be the first to enter a hot new restaurant or shop, while Savannah has to eliminate a marching parade of scenesters before they work their way toward a big red button that, when pressed, will cause her to fall into a bottomless pit (I told you it was weird.) Grace’s stages are slightly easier, as she’s strong enough to throw her hipsters onto any spot on the stage that she wants, while Savannah has to roll her’s, meaning her shots can be blocked by other people or obstacles that are in the way. 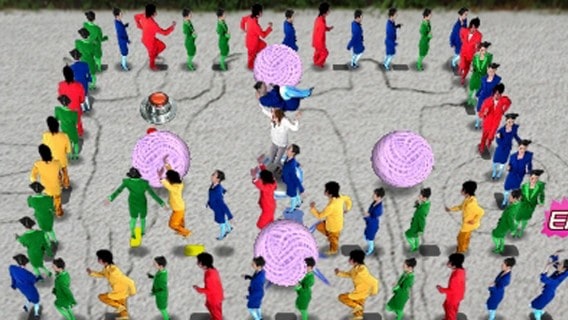 Despite its wacky premise, the central conceit of Tokyo Crash Mobs’ gameplay — match three of the same color to make them disappear — is a tried and true staple of the puzzle genre, and for the first few levels, it works pretty well. Unfortunately though, it didn’t take long before TCM’s more frustrating elements managed to destroy any positive feelings I got from my first impressions of the game.

The biggest problem is the controls. You control how you toss/roll your hipsters by dragging a cursor around the touch screen, while the actual action takes place on the top screen. While this works fine in the slower, easier stages at the outset of the game, it becomes extremely difficult during the game’s faster paced stages (which comprise most of the game,) to accurately and quickly aim your shots. The game also features special power up items that are supposed to give you an advantage and make each stage easier, but in practice they just make things worse: in order to use these items, you have to take your eyes off the top screen (i.e. where the actual game is taking place,) click on an icon on the touch screen, and then drag and drop it to the spot where you want to use it. Activating items quickly is strangely hit or miss, and sometimes the game felt like it didn’t recognize when I was tapping the item icon, and place the items on the part of the stage that I wanted to use them on felt even more finnicky. The game doesn’t pause while you fumble with your power-up items either, so by the time I ended up getting them to work, I was often in a worse situation than when I began. By the end of the game, I was ignoring the power-up items completely and my performance was actually better because of it.

These problems are exacerbated once Tokyo Crash Mobs starts tossing in a bunch of gimmicks into the gameplay, such as new scenesters who cut into the line and mess up your pattern, or running scenesters who you have to eliminate immediately before they cause an automatic game over. I certainly don’t mind Mitchell Corp.’s attempt to infuse the game with a little extra challenge, but the stages and their strict time limits were already challenging enough, and many of these gimmicks need to be dealt with by throwing or rolling a scenester into them before they ruin you game, which isn’t exactly easy given the game’s touchy controls.

Strangely, the game also has a few camera problems: in Grace’s stages for instance, the camera is supposed to scroll over as you work your way through the line, but I often found myself stuck on the edge of the screen, blindly chucking scenesters off screen in the hopes of creating a reaction further down the line.  By default, the game also features a close-up of either Grace or Savannah every time you eliminate 2 or more groups of scenesters at once, and these close-ups pop up over the actual gameplay and block your view of the action. Thankfully, you can turn these character “pop-ups” off at the options menu, but the fact that they were even in the game in the first place is telling of how Tokyo Crash Mobs puts more of an emphasis on quirkiness rather than gameplay.

With that said, there are short, fleeting moments where Tokyo Crash Mobs’ controls behave and the gimmicks manage to not get in the way of your fun, but those moments are few and far between. Tokyo Crash Mobs will probably sell a ton of copies based on Grace and Savannah’s cuteness, but there’s little substance underneath this game’s attractive veneer. At its best moments, Tokyo Crash Mobs’ gameplay is merely passable, and at its worse, it’s frustrating enough to make you want to hurl your 3DS against something. There’s no shortage of great puzzle games available for the 3DS, so unless you’re really desperate for a new puzzle game, there’s really no reason to pick Tokyo Crash Mobs over any of the other genuinely great games also available on the e-Shop. 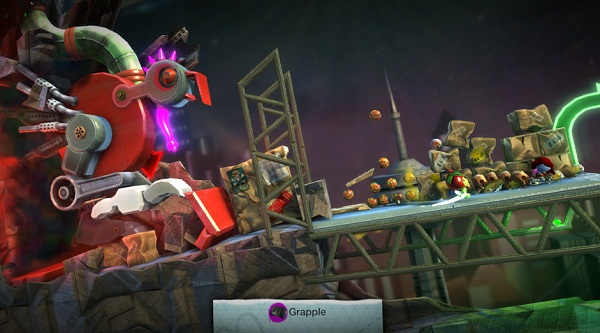 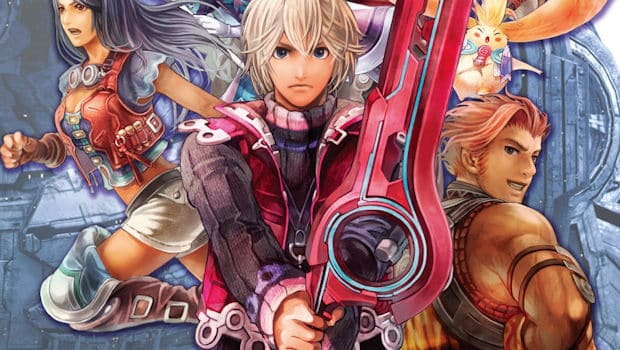