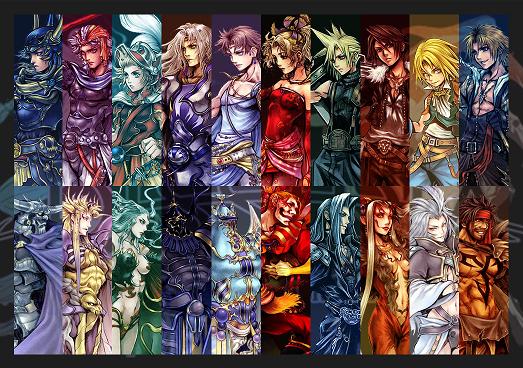 Yesterday Konami celebrated Metal Gear’s 25th Anniversary. Today, Square-Enix gets to celebrate the quater-centennial of their own flagship franchise. Square is notorious for using any reason they can to re-release old games, but this time it kind of makes sense: for FF’s big 25th birthday, they’re re-releasing Final Fantasies 1 – 13 in one massive collection.

In addition to the games, a number of bonus items are included: a 2 CD soundtrack with music spanning Final Fantasy’s 25 year history, a collection of videos about each game in the series, an art book, and a special code that Final Fantasy XIV players can input into the game to get a unique rare item.

The whole package is currently only scheduled for release in Japan, where it will retail for  ¥35,000 (at current exchange rates, that’s about $450 US.) It’s certainly the ultimate collection for diehard Final Fantasy fans (even if the PS1 versions of the earlier FF’s included in the box aren’t the best versions of those games,) and I’m sure there are plenty of FF fanboys out there willing to pay almost half-a-grand to import this beast.