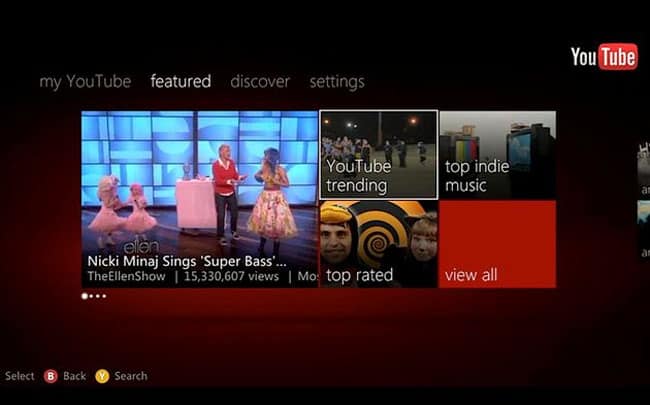 If you have been wondering when the YouTube app showed up on your Xbox 360, don’t worry about it, just be happy they finally decided to update it.  When I logged into the app yesterday after a long day of work, I was met with a 14MB download and install that put a nice little smile on my face.  Once I got into the app I was not impressed by anything spectacular with the update, but at least it is an update, right?

Just like others that reported the same thing online, I am not a fan of companies that talk as if they just re-invented the bread slicer with the new app update and then we do not get all the important information we should about the update.  YouTube did exactly this and it was quite annoying.  For now, I am just going to enjoy watching talking dog videos on the YouTube app or maybe check out the latest walk-through videos for Diablo III.

One of the first things that I hoped the update fixed was the speed of getting anything done on the YouTube app.  The company promises that the update does just that, claiming the app is now 5 times faster than before.  Other channels were added as well, like the one that is specifically going to put the old MTV to rest.  The channel is based solely on official music videos.  The company also promises the user experience will be that much better, plus content creators will have a better platform to use for building an audience for their channel.  Bascially, I agree wit AllThingsDigital when they say it comes down to being able to show more ads and make more money per video.

Either way, I like updates for the most part, at least it shows the company is still interested in their product and what consumers and users think about it.

Goku fights against the main antagonist of the first Dragonball …