Samsung’s Galaxy Tab 2 10.1 and 7.0 will be releasing to the public on separate days and for different prices. The 10.1 will make its way to the market on May 13, coming up very soon for $400. The 7.0 has already been released since April 22 which was less than a month ago, now retailing for $250. If you want a more portable tablet device with many functions, the 7.0 would suit you better. But if you really want to enjoy yourself and don’t mind the size and weight difference, the 10.0 is for you. Both tablets will be available in Titanium Silver or Pure White depending on your preference.

Overall, the functions and specs on both tablet are quite similar, so size is the real factor when making your tablet purchase. The 10.1 is very slim (9.7mm) and reasonable light (581g) while the 7.0 is strangely thicker (10.5mm) but almost half the weight (345g). Another difference between the two tablets is that the 10.1 will have extra add-ons such as a Desktop Dock and Keyboard Dock. The Desktop dock will allow you to charge your tablet while using it as a hands-free multimedia device or just a digital photo album. On the other hand, the Keyboard dock will give your tablet laptop functionality.

In comparison to the original Galaxy Tab models in terms of size and weight, the 7.0 2 is much thinner and a bit lighter than its predecessor. The 10.1 2 although, is thicker and heavier than the the original. While in specs, the 7.0 gains a processor boost from a single core 1.0GHz to a dual core 1.0GHz in the 7.0 2. Once again, the 10.1 2 is left with the same processor as the 10.0. Back then, there was no such thing as Ice Cream Sandwich Android 4.0 so the 7.0 ran on Android 2.2 Froyo while the 10.1 had Android 3.0 Honeycomb. 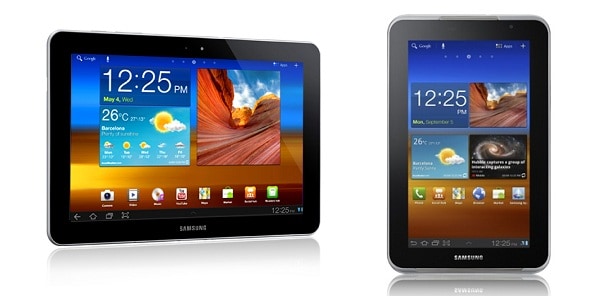 These technological advances from the original to the second models  took place over the course of about a year. The 10.0 was released on May 10, 2011 and the 7.0 started selling on  April 11, 2011. In terms of appearance, the new Galaxy Tab 2 give off a much more sleek design while the originals are much more bold looking. Overall, these new tablets are similar to the iPad 2 because they improve on the originals.

Microsoft announced last November that they will be discontinuing their …

A few days ago, heavy rumors about Sprint possibly getting …