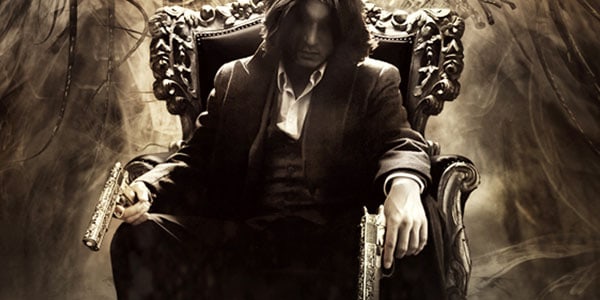 2K Games and Digital Extremes provide an effectively thrilling, yet blue-balling romp through Hell via Jackie, a mob boss with two grotesque mouths jutting from his back. Also they like to eat people and stuff.

I don’t think I’ve stressed enough how much I like games that involve demons in one or another effect. That’s because it’s hard to properly convey how truly amazing the concept is. The possibilities in hell are truly endless, because it’s apparently everything everyone hates, forever, in ways you can’t possibly imagine. Darksiders, Bayonetta, Dante’s Inferno, and now this, manage to keep the genre fresh as all hell (there’s a pun in there somewhere, but I’m not an asshole) while sticking to the mechanics and aspects that I love the most.

I’ll level with you, I haven’t played the first one. Then again, you don’t really need to. Everything important is explained to you right off the bat, and the rest of it you learn as the game progresses. It’s a very classic Italian mafia sequel; boss is enjoying the high life/boss almost gets “whacked” (not to be mistaken for “whacked off”, although if everything at the restaurant in the beginning cutscene went right I’m sure that would have happened)/boss decides to take revenge. Along the way there’s betrayal, vigilantism, it’s all very Godfather. But that’s only the half of it. The other half is The Darkness, which is literally everything about the dark incarnate and sticking out of your shoulderblades, making a scene and chewing on hearts for health. You earn “essence” (a.k.a. human souls) which allow you to purchase upgrades that make your demon-tentacles even demon-tentaclier. The Darkness wins as an FPS/RPG combination. 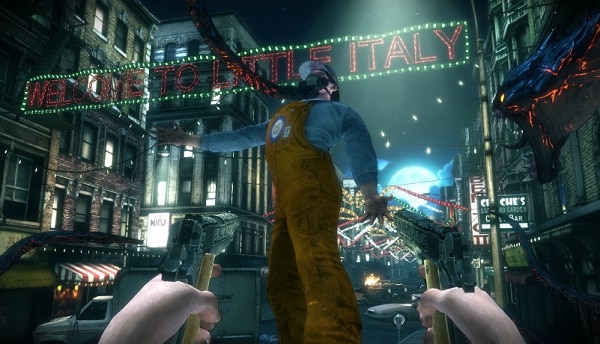 Pictured above: A dead man. Trust me.

I wouldn’t be an unbiased game critic (I’m not) unless I talked about some flaws here or there. The best part about this game’s cons is that they’re all hilarious. For instance:

The great double-mouthed wonder that hangs around inside you can pick up enemies and throw them. You also have the option of picking up certain scenery and hurling it at people and/or willy nilly just for fun. The problem is, if you pick up an inanimate object and throw it at too steep of an upward angle, it promptly disappears. I’m assuming this has to do with the game’s limited rendering of the sky, but since it doesn’t happen with people, you can still chuck them a mile into the air and watch them flail helplessly. It’s kind of funny, watching a trash can go “poof” in mid air, anyway.

There’s really only one other issue bogging this game down; the dialogue. Most of the time it’s not a problem. 2K, in their vast attempts to make their artistic endeavours immersing, have you carry on short conversations with most of your compatriots. The problem is, a couple of them talk like they have cerebral palsy just in their mouth. Every sentence is followed by seconds of emphatic pause which makes sitting through their boring monologues even worse. You think that Johnny the Twitchy Bastard With One Dead Eye (that’s his gang name) is finished telling you about how bad your decisions have been, only to have him start up again on a tangent just as long and annoying as the first. This is a small problem, but it messes with the pacing in the game. It’s the same with walking around the mansion (your safe house, where a lot of your missions start), because you literally have to walk. There’s no jumping over railings, sliding down banisters or shooting friendlies for fun. It’s all very serious, until you actually get into a mission. 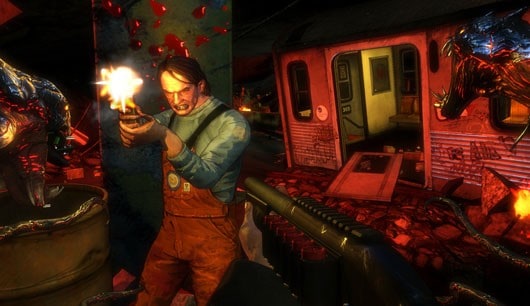 The second-last thing this man saw was a demon's mouth. Then he saw his insides. On the outside.

Those issues, however, are minor compared to the overall splendour that is The Darkness. In hindsight, I guess the instances in the mansion are in there to draw out what is essentially six or seven hours of gameplay. If you like games like this, you’ll definitely be left wanting more of it. The average gamer will be able to beat The Darkness 2 in a day, go back, play the alternate ending, and still have time for the pigeon shooting minigame. Then he or she can go to sleep soundly, knowing that they were a part of mouth-watering demon video game history.

Evo fans have yet another reason to get hyped about …