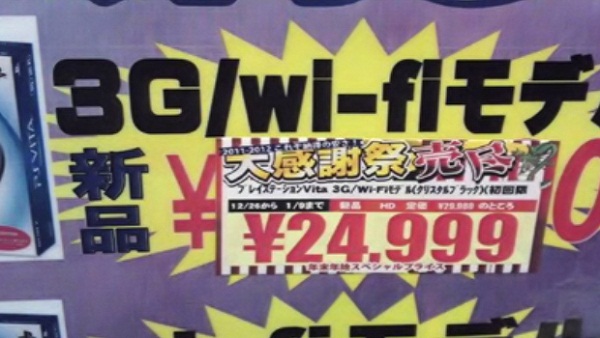 The Vita hasn’t had the greatest start, much like the 3DS it faltered in sales shortly after launch and has been beaten out by the latter pretty consistently. Even the Vita’s older brother, the PSP has sold more weekly than itself. Because of this retailers are nearly overstocked with the portable gaming machine and have to move the stock to make profit and room.

Just to clarify, this is not Sony’s doing, it is the retailers themselves tat are slashing prices. Some of the larger retailers are slashing the price as mush as 20% bringing the price down of the 3G version from ¥29,980 ($390USD) to a slightly easier to swallow ¥24,999($325USD). The economy is probably much different in Japan so despite the price being much higher than the expected $250 price tag here, $390 is probably the equivalent of that there.

This move may prompt Sony to officially reduce the price and, likely, by more than 20% to stay competitive with the 3DS which is still selling like hotcakes. Though they could be waiting to see how successful the PS Vita is in other territories, with the expected, lower launch price point than what Japan had.