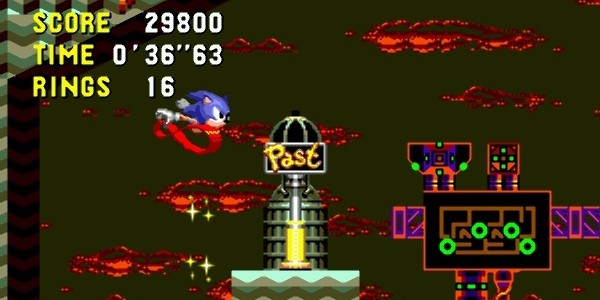 Let’s face it: Sonic is kind of a joke nowadays. Despite some solid recent releases like Sonic Colors and the Sonic Rush series, most of the games he’s appeared in over the last decade are mediocre at best and unplayable shovelware at worst; garbage like Sonic Unleashed and the 2006 Sonic the Hedgehog has transformed Sega’s premiere mascot from gaming icon into the biggest joke in the gaming industry. Every time I mention to someone that I like Sonic games, I quickly have to qualify my statement with “I mean, the good ones. Y’know, the old ones,” unless I want to be laughed at and mocked (and rightfully so). Sega’s been making gradual steps towards improving Sonic’s tarnished imaged, but they’ve still got a long way to go. Thankfully, be re-releasing Sonic CD on PSN and XBL, they’re giving gamers a much needed reminder as to why Sonic was such an icon in the first place.

Sonic CD was released for the Sega CD back in 1993, and since Sega’s CD attachment never gained much popularity, the title was overlooked by most kids in favor of Sonic 2, which was released slightly earlier and developed concurrently alongside Sonic CD. It’s a shame that the game never got the attention it deserved back in the day, because it’s simply not just one of the best Sonic games ever made, it’s also one of the best 2D platformers ever created, period.

While superficially similar to the “main” series of Sonic games on the Genesis/Mega Drive, Sonic’s lone outing on the Sega CD is actually a fairly different than Sonic’s other adventures; while speed is still definitely a core aspect of the title, the game places far more focus on exploration and intricate platforming than any of the other Sonic games do. While levels in other Sonic games are designed like roller coaster rides, emphasizing speed and split-second reactions, the claustrophobic, compact worlds of Sonic CD are meant to be explored; instead of blasting through these levels, you’re supposed to run back and forth, searching every nook and cranny for power-ups, time-gates, and enemy generators.

While you can technically beat the game by simply running to the end goal as in a traditional Sonic game, doing so would cause you to miss out on the best of Sonic CD’s content. In order to truly complete the game, Sonic has to travel back in time within each level and destroy a robot generating machine. Doing so creates an enemy free and power-up filled “future” version of that level, and travel back into the past and fixing the future in every level is a requirement in order to get the game’s “true” ending. In order to travel through time, Sonic has to achieve a certain speed, Back to the Future-style, and this lends a game a puzzle element that’s simply missing from other Sonic games: figuring out how to use the environment in order to launch Sonic at the required speeds necessary for time travel is often as challenging as any of the platforming or boss fights, and the need to fully explore every level (and every time era,) lends the game a high level of replay value that’s also missing from other Sonic games as well.

While this substantial shift in focus makes Sonic CD play fairly differently from other Sonic games, the changes generally work out: the controls are tighter to compensate for the increased emphasis on platforming and precision movement, the time travel mechanic essentially gives you 3 versions of every stage to explore, and, on a whole, the level design is simply far more complex and offers a fairer challenge than most of the other 16-bit Sonic games. While it’s easy to understand why some fans prefer the quicker, faster gratification of the Genesis Sonic’s, Sonic CD will always remain a personal favorite of mine due to its more cerebral nature.

Now, we all know that Sonic CD is a good game, but Sega doesn’t really have the best reputation when it comes to porting their classic games to modern consoles — Sonic’s Ultimate Genesis Collection for PS3 and 360 applied a (thankfully optional) hideous “HD filter” to its selection of games that made those pixel-art classics look like a grade schooler’s first attempt at watercolor painting, and the more recent Dreamcast Collection provided a port of Sonic Adventure that was so sloppy and lazy that its really not worth mentioning beyond this point. Thankfully, Sega put a whole lot more effort into this re-release of Sonic CD than they did their other “classic” ports, and I can happily say that PSN/XBL version of Sonic CD is easily the definitive version of this game.

Unlike Sega’s previous ports, Sonic CD looks absolutely beautiful on an HD tv. The game gives you 3 visual filters (smooth, sharp, and the original pixelated style,) and regardless of what filter you chose (they honestly only have a minor effect on the image quality,) the game upscales beautifully without any blurriness or washed-out colors. The game’s trademark soundtrack is faithfully reproduced, and for the first time ever, players can choose between the game’s original Japanese music and the (vastly inferior) American soundtrack. Both sets of music are distinctly 90’s (as is the game in general, with it’s day-glo color palette and hand-drawn anime cutscenes,) but the Japanese soundtrack in particular is very good, possessing a sort of proto-Jet Grind Radio style charm.

This version of the game even manages to make some improvements over the original. The original Sonic CD was developed concurrently with Sonic 2, and was originally intended to be released before Sonic’s “true” sequel, but a last minute delay caused it to come out just afterwards. Since it was developed by a different team than Sonic 2, CD was missing 2’s biggest addition to Sonic’s repertoire: the spin dash. In it’s place was the Peel-out, a slightly clunkier but generally just as useful way to charge Sonic’s speed up. For the HD version of this game, Sega has added in Sonic 2’s spin-dash, which should make the game easier to get into for players used to Sonic 2 and 3, though the original Peel-Out still remains in there as an option for purists. The game even adds Tails as a playable character (unlocked by beating the game once,) though playing as him is essentially the game’s “easy mode” as the levels weren’t designed around his flying ability, which allows him to bypass most of the game’s more challenging areas by simply hovering over them. Still, despite not really fitting into the game, it’s a neat bonus.

The biggest improvement belongs to the game’s special stages: as in Sonic 1, beating a level with at least 50 rings gives you access to a 3d, behind-the-back view bonus round that’ll allow you to earn continues or a “Time Stone” (this game’s equivalent of the Chaos Emeralds, which, as in Sonic 1, are required to get the game’s best ending,). Previous versions of the game all suffered from horrible slow-down during the bonus stages that made them almost unplayable; the HD version features smooth scrolling and rock-solid framerate that finally makes these bonus stages into a fair challenge; while it’s still difficult to gauge how far you are from a target and if its within jumping range, the new version of Sonic CD makes these stages infinitely more enjoyable than previous versions of the game.

Then there’s the price: for only $5, you’re getting the definitive version of one of the best platformers that Sega ever made. It’s a far better choice than the sloppy, creatively bankrupt Sonic 4 (and half the price,) so if you’re looking for a quality Sonic adventure and have played  the original Genesis trilogy of Sonic games to death, give Sonic CD a try. At 5 bucks, it’s not much of a risk even on the (extremely unlikely) chance that you don’t end up liking it, and its guaranteed to be a hell of a lot better than most of the newer Sonic games. 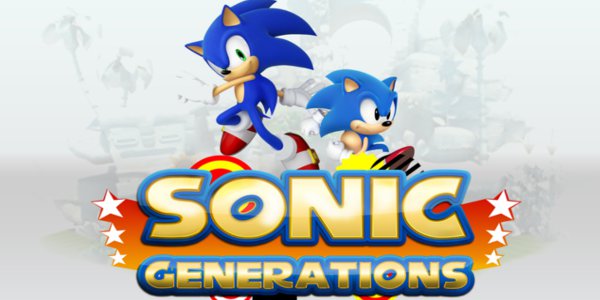 Sonic’s trip down memory lane is a bumpy ride.