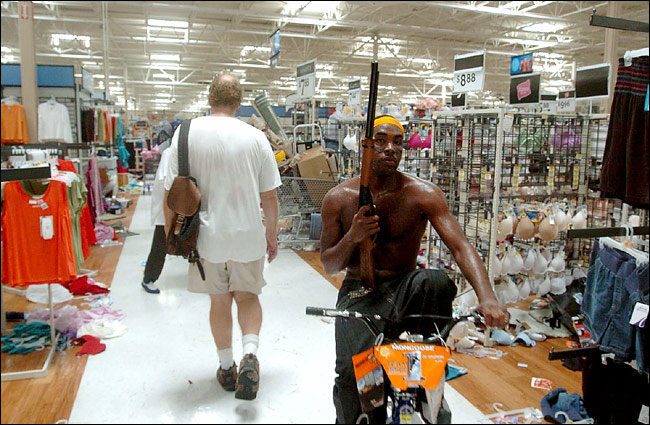 Yes, it’s that time of the year again, where Americans humbly give thanks for their friends, their family, and all that they’ve blessed with. Thanksgiving is the time of year when you really learn to appreciate the joy of good company and something as simple as a warm meal.  Of course, the day after Thanksgiving is when we discard all that hokey, Hallmark greeting card crap and get back to doing what we Americans do best: blind consumerism and acquisition of material goods at the cost of safety, financial responsibility, and basic human decency. Yes, it’s that time of the year again, when people get trampled to death at Wal-Mart and people get brutally beaten on the street over this year’s hottest toy or piece of electronics. Yes, it’s Black Friday.

With the economy still in dire straights, it seems that retailers have gotten especially competitive this year, and this means a ton of good deals for gamers on a budget.  Of course, you’ll have to brave a mob of violent, mindless savages in order to make good on these deals, but thanks to games like Left 4 Dead or Dead Rising, I’m sure gamers in particular are well suited to cutting their way through a crowd of brain-dead demi-humans.

The go-to Black Friday destination for nerds in years past maintains their reputation by offering some excellent deals on hardware this year, including an 250 GB Xbox 360 bundled with the biggest 360 exclusives of last year, Halo Reach and Fable III, for only $200, as well as a competitive PS3 bundle for the same price that includes LittleBigPlanet 2 and Ratchet and Clank.  If handheld gaming is more your thing, Best Buy will be selling the limited edition Zelda and Mario 3DS bundles for $179.99 each, quite a value considering they include the system and a game for basically just the system’s usual MSRP.

Best Buy also delivers some deals on software as well, with recent Fall releases like Uncharted 3, Batman: Arkham Asylum, Gears of War 3, Need for Speed: The Run, and Battlefield 3 all going for $30.  It’s worth noting that some of these games can be had for a few dollars cheaper at Wal-Mart on Black Friday, but then again, saving two or three dollars might not be worth the hassle of wading through the infamously vicious Wal-Mart crowd.  To get back on topic, more recent releases, like Assassin’s Creed: Revelations and Forza 4 will also be on sale at Best Buy for $34.99.

Like I mentioned earlier, if you don’t mind fighting your way through a crowd of crazed soccer moms and dudes who think showering is a weekly habit, then Wal-Mart one-ups Best Buy with holiday hits like Forza 4, Batman: Arkham Asylum, and Battlefield 3 all going for $28 dolllars, a few George Washingtons less than most other stores’ Black Friday deals. Walmart is also offering the same $200 PS3 bundle that Best Buy has, but their $200 360 bundle includes the new-er Gears of War 3 and a $50 gift card rather than Best Buy’s Fable III/Halo Reach combo.

If you, for whatever reason, decide to pick up a Wii during the twilight of it’s life (Hey, I’d say it’s worth it for Skyward Sword alone, despite the lack of other worthwhile titles,) Wal-Mart is selling a special, exclusive blue-shelled Wii for only $99. Sure, the system may not see much in the way of new games, and newer systems are lacking one of the Wii’s best features, but if you’ve got kids or simply want to play the handful of genuinely good titles that the Wii has accrued over the last 5 years, it might be worth the newly discounted price.

Target, a.k.a. the classy Wal-Mart, tries to get the jump on its biggest competitor by offering Forza 4 at its lowest price of the season, $27, one dollar less than Wal-Mart’s. Not a huge savings, but again, probably worth it if you want to avoid the lynch mob at Wally World. Target also has games like Battlefield 3, Resistance 3, and Gears of War 3 for $37, which is more expensive than either Best or Wal-Mart, but in my experience, the crowds at Target on Black Friday have been much more manageable than at other stores, so the extra money might save you some irritation.

If you need to do some Christmas shopping for kids and/or people with bad taste in games, Target seems to be clearancing out a lot of their Wii and DS shovelware for cheap, including child-rearing sim Babysitting Momma and, uh, the probably terrible iCarly game for Wii at five dollars each.  While their sub-twenty dollar deals are mostly on shovelware, you can find a few worthwhile deals, like the Wii’s completely okay-to-passable Epic Mickey for $15, and the surprisingly excellent Sonic Colors for $20. Target’s ad promises a lot more deals on hundreds of other games that aren’t listed, so it might be worth checking out just to see if there’s a surprise or two.

Gamestop, the store that routinely gives away the pre-order bonuses that they promised me and then asks me if I want to sign up for their discount card, has enough good deals this year to make me overcome my bitter hatred for the store and might actually just motivate me to shop there again: as per their usual tradition, they’ll be running a buy 2 get 1 free deal on all used games and accessories, and they’ll also be having a buy 1 get 1 free deal on all The Sims games, in case you need to escape spending time with your real family this holiday season by wasting your time with a virtual family.

If you’re looking for new games, Ubisoft’s excellent 2D platformer Rayman Origins will be discounted by $20. I know there are a lot of big games coming out, but give Rayman a chance; if you’ve ever enjoyed 2D platformers in the past, you’ll enjoy this game. Also of note are Driver: San Francisco and Borderlands: Game of the Year Edition for only $20 each, as well as the okay-but-not-great Sonic Generations for a reasonable $30. PS3 gamers looking to catch-up with the system’s best titles will be happy to find that most PS3 Greatest Hits titles are only $15, so if you don’t mind the ugly red packaging, you can score some of the PS3’s best games, like Ratchet and Clank Future, Heavy Rain, and Uncharted 1 or 2, for a decent price.

As for online deals, most online retailers like Amazon or Newegg are keeping their Black Friday/Cyber Monday deals close to their chest, and if Amazon does a repeat of last year, they’ll likely price match the best deals from Best Buy and Gamestop at the very least.  Once more details regarding online sales surface, or any other deals come to my attention, I’ll be sure to let you guys now.

EA hopes to revive the franchise with the upcoming release …