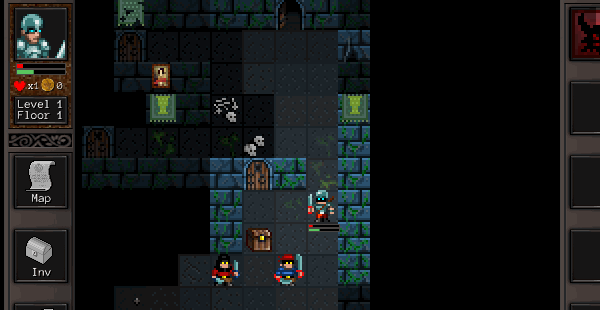 Cardinal Quest is a dungeon crawler inspired by games like Gauntlet, where you choose a single character type, and use your capabilities and strengths to defeat the monsters and plough through a randomly generated dungeon to defeat the minotaur Asterion. The game plays like a turn-based roguelike, which covers games like Rogue, Nethack, and ADOM, meaning you have all the time in the world to plan tactical maneuvers.

The game is nothing large, lacking in savepoints and checkpoints meaning the game has to be cleared in one run, but it is a good waste of time if you like these kinds of games, and the randomness of the game’s handouts, dungeons, and other content is likely to keep you busy for a good while.

Cardinal Quest can be bought for a minimum of one dollar for today only, but don’t be too stingy, indie developers have to eat something other than instant ramen. You can play the demo if you are having second thoughts on what you want to spend your money on.

Batman: Arkham City is without question, one of the most …

Market research firm Newzoo announced that they think that the …