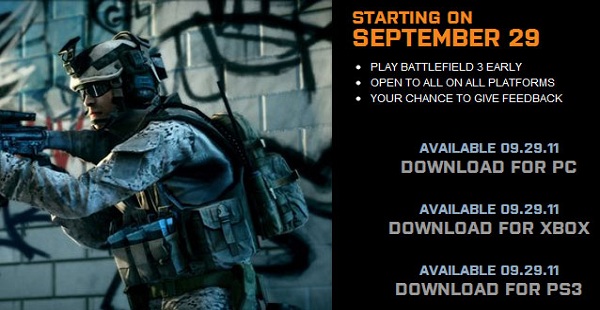 EA DICE is not jumping the gun with its acclaimed military shooter; they want it battle-tested before the game hits the stores on October 25. The publishers announced earlier today the details about the open multiplayer beta testing of Battlefield 3 for the PC, Xbox 360 and PS3 platforms, which will start on September 29th. Some players will be able to download the beta content ahead of time – People who preordered the PC edition will be able to access the beta content and start the action through EA Origins on September 27, as well as those who preordered the Medal of Honor Limited Edition back in 2010.

Unlike what was rumored at first that a Medal of Honor CD would be needed to join beta testing. It seems that those rumors were fallacious, and the only thing that ties Medal of Honor with Battlefield 3 is the Online pass that gives you a chance to play the game earlier than your friends,which you got if you purchased the limited edition Medal of Honor or if you pre-ordered it at select retailers.

Battlefield 3 beta will feature one map, Operation Metro, which can be played on the single game mode, The Rush. Operation Metro is set in the nostalgic subways of Paris. The Rush Game Mode has two teams taking over strategic positions in the map, one team is assigned to be the offensive team tasked to acquire the position, while the other team is assigned to be the defensive team tasked to defend it.

The full game will offer both single-player campaigns and online game modes that can support up to 64 players on the PC version. This will certainly give big smiles to PC gamers, as it is surely more enjoyable to play campaign co-op, pilot jets, and other vehicles against 64 other gamers.

On the 14th, a server belonging to Square Enix was …