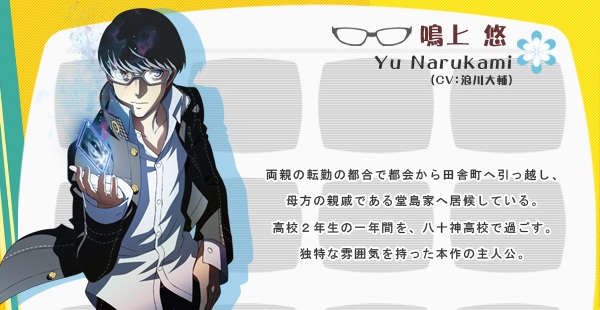 If you are a fan of the Megaten series, then there is no doubt you have played Persona 4 on the PS2, which got great reviews for its character development, plot, gameplay, and incredibly long playtime. 30 second trailer after the jump.

If you’ve not played it, Persona 4 is a supernatural modern murder mystery set in a small town called Inaba revolving around the daily life of the largely-silent protagonist. The main characters are all Persona Users, who can summon a personification of their true selves which they hide with a facade they use in daily life, which takes the form of a mythological creature or God, meaning the general character development of Persona is about realizing who you are and accepting it.

The trailer shows only some brief scenes, including a fight between the protagonist (named Yu Narukami in the anime adaption) using his persona Izanagi amd Yosuke’s shadow self. It looks to be an accurate adaption of the game. Persona 4: The Animation will air in Japan in October, the success of Persona 4 and an anime based on Persona 3 named Persona: Trinity Soul means it’s likely this will get liscenced for US release at some point.