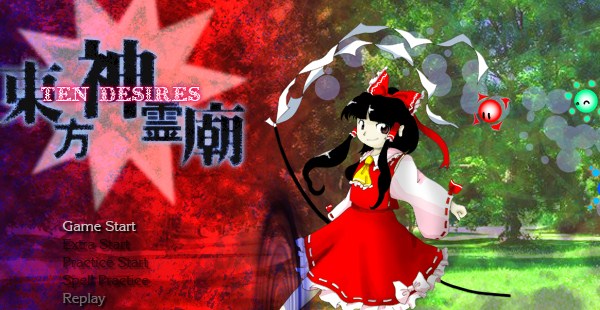 Today, Ten Desires was released at Comiket, the latest entry in the popular Touhou series. A 101, Touhou is a vertical bullet hell shooter known for its huge and largely-female cast, artistic bullet patterns, soundtrack, fandom, and being made largely by one man named Junya Ota, also called Zun.

One of the biggest differences most fans will notice is the step up in the art style. ZUN’s artistic skill is mostly in watercolor and drawings, which don’t translate well into videogames. Now, his lineart and colors are far nicer to look at. The graphics of the game itself are also highly improved in many aspects.

The Touhou games after the 6th entry gradually increased in their difficulty as the elaborateness of the bullet patterns went up, sometimes to extreme levels. Ten Desires is far simpler and far easier than the earlier titles, making it more accessible to players who find the games too difficult. The difficulty can be compared to the PC-98 Touhou games where it’s based more on personal skill than trying to fit through tight gaps when well over 1000 or even 2000 bullets are on the screen at once. 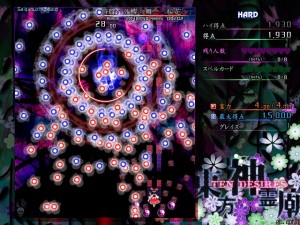 The Gimmick in Ten Desires is the Divine Spirits and the Trance mode. There are four types of Divine Spirits that are dropped by enemies, and can be picked up. Any spirit will refill the Trance meter (more on that later), but blue ones increase the score value of any point items you grab, purple ones add to your Lives, and getting enough grants a new one. Green ones are the name as purple, but they grant bombs instead, which are powerful screen-clearing attacks for when you’re desperate. The last are White spirits, which increase the Trance meter at a much faster rate than the others.

Basically, the trick to a high score is to grab a huge amount of blue spirits and stay near the top of the screen to gather as many point items as possible at their maximum value. There’s more to it than the previous games but there is less depth in how to grab the items and make them appear.

The Trance mode is one of the biggest reductions in Touhou’s notorious difficulty. During it, you have a fairly long period of invincibility and heightened attack power, also, the potency of Divine Spirits you collect are doubled (or x10 for point boosters).

Anyone who has played Touhou will know by this point that this entry is far easier.

Now, the characters. The playable characters this time are the ever-present Reimu and Marisa, along with Touhou 7’s 5th stage boss Youmu and the 5th stage boss of Touhou 10, Sanae. Though they had multiple shot types in the previous games, they now have one mode and what shot is used depends on your focus. Reimu has a homing attack and a straightforward high damage attack. Marisa has a piercing attack for wiping out entire waves and a high-power attack like Reimu (but slower). Youmu has a narrow attack in her normal state, but when focused, she can charge up a short cone that deals major damage to anything in front of her when released. Sanae has a slight spread to her attacks. Each girl has a unique bomb and they all really have the same overall effect, crush everything! Each of them are completely different in how they play instead of the difference being rather subtle or completely glaring or situational. 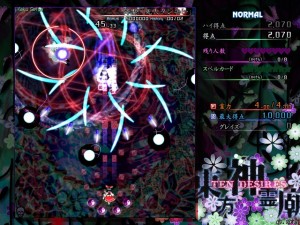 Though this is polished graphically, I feel the difficulty of this entry is a smidge too low compared to the others. I was able to get up to the third stage on my first playthrough before I ran out of lives. Usually I’m stomped to bits on the second or third stage. Overall, even though the game is easier and less challenging compared to more recent entires, it’s not nerfed down to an extreme level, and still poses a good degree of difficulty. Couple this with an excellent soundtrack, you have a solid game.

Overall, Touhou 13 gets itself an 8/10, it’s a good game but doesn’t live up to the gameplay or artistic level of the previous entries. The soundtrack is a strong saving grace however.