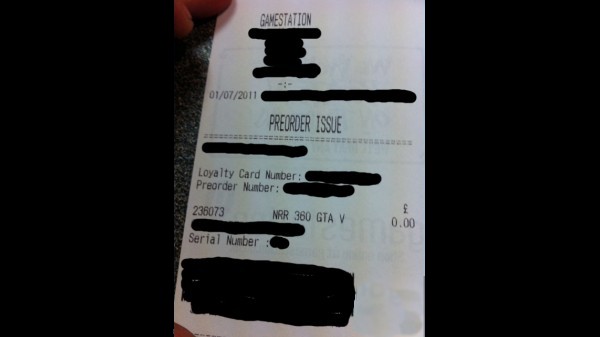 Though the existence of GTA V is speculative at best, Gamestation had GTA V on their pre-order list for a brief moment before it was quickly removed. Some were able to quickly pre-order the game as proof but whenever they are truly applicable or not is up for debate. I got the image from here. However the ridiculous censoring of the details leads me to believe it’s fake.

There have been rumors of GTA V being in development for a long time and was expected to show up at E3, but had no appearences or even mentiones. Before E3 happened, GameStop’s German website had it marked as a release for January 2012, and the date has appeared on some retailers sales schedules.
It is possible for the information to be fake, fabricated, in error, or an actual leak, but Rockstar has been very quiet on whenever GTA V exists or not, but that usually means either “We’ve not decided” or “We’re working on it”, usually the second one from my experience. Nowadays “Unfortunately I’m not allowed to talk about that at this time” means that they are up to something, but absolutely nothing is being said whatsoever.

I’ve seen a few things in my lines of work where details that are supposed to be embargoed are published on the wrong date, which can cause a few legal issues if it’s not fully patented yet, or if the whole thing is under an NDA. Regardless, someone at Rockstar isn’t keeping his mouth shut, or someone is just being a huge troll.

A possibility is that Rockstar deliberately leaked some info to stir up the masses into a small feeding frenzy for info, something that I wouldn’t put past a few companies.

Ubisoft is about to kick off their E3 pre-show, and …