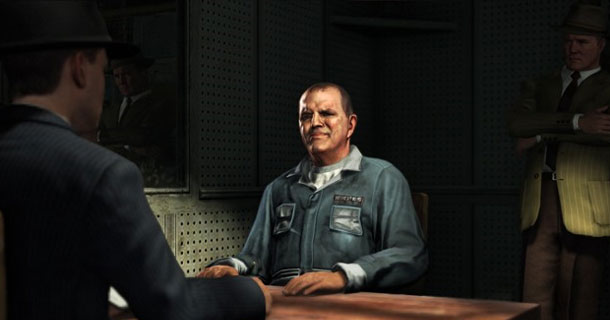 It’s becoming a tradition for Rockstar. They make an immersive sandbox game about criminal activity, name it GTA, slap on a bigger number than the last one and make loads of money off of it. That much we know. However, they then use the engine from the game that made them so much money and bring out something so totally different from Grand Theft Auto that it leaves the mind reeling. First it was Bully, using the GTA 3 engine. Now it’s LA Noire, only this time they are using the GTA IV engine.

L.A. Noire is a game set in 1947 Los Angeles, and draws on the film noir genre with a distinctive art style and huge dollops of moral ambiguity. It starts of with Cole Phelps, who has joined the police force to “right the wrongs” he has committed during World War II. You go around solving mysteries, gathering evidence, interrogating subjects and basically playing out your average episode of CSI, only some 60 years earlier. So, you start off as Cole and progress through the game, starting off as a patrolman, becoming a traffic detective, then dabbling in homicide and vice before finally climbing to arson investigator. There is an overarching story that ties up all these cases together quite well, but just fails to impress on the whole. It tries to do what Max Payne did, only with a bit of CSI: The Game thrown in and while Rockstar have done a superb job… it feels slightly disjointed.

The cases themselves are, for me, the best part of the game. The cases not only tickle the cerebral cortex, but due to the use of the newest MotionScan technology the interrogations are an absolute blast. Now before I continue, I have to say a little something on the MotionScan technology that is being used here – it’s wonderful! The facial expressions of the characters are brilliantly recreated (in fact, it’s 32 cameras capturing every slight movement of an actor then digitizing it) and really force you to think before proclaiming someone a liar or calling their testimony into question. The game does hold your hand threw the first few and it does cheapen the initial effect, but once the game lets you do it yourself, you quickly start seeing how difficult it is to interview people (from a police perspective).

There is so much attention to detail that you can get easily overwhelmed, but Rockstar does a good job of keeping you on track with the story. However, it is still a game by the kings of sandbox games and you needn’t stick to the story all the time obviously, but it is still quite linear. That said, the eery effect you get when you uncover a new piece of  evidence in a later crime that pertains to an older one and get the feeling that you might have put the wrong person in jail… well all I can say is that it is quite intense. I can just imagine what real policemen feel like when they get cases like these where there is no black and white solution.

Otherwise, some details do get irritating. If you mess up in a case, your boss still heaps praise on you for your previous work – it would have been nice if they had tempered that a little but hey, no one’s perfect. Also, I’ve never been a  fan of the driving missions in GTA and this is the same. They are absolutely the worst part of the game for me. Thankfully you have partner who you can instruct to drive you which works like a sort of auto-travel. The story itself, apart from the cases, takes long to get going and doesn’t really feel like the tour de force that it was meant to be. I guess that would be asking for too much, but it really is quite irritating. If the cases had been tied up more cohesively and the action was a little more intense in the beginning stages… this quite literally could have been the “Best Game Ever”. Period. However it isn’t, though I have to say that if Rockstar make an LA Noire 2, then they will probably get it right. I’m keeping my fingers crossed. All in all, I’d give this a 8/10