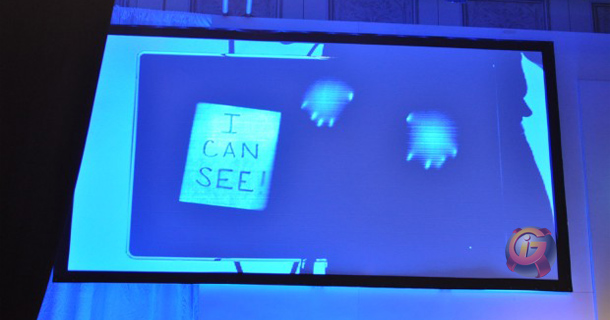 CES has only just begun and Microsoft showed off a new version of Surface, its tabletop touch computer, during the company’s keynote address on Wednesday night.

They have gotten rid of the large box with a bunch of cameras inside Now, there’s a piece of super-tough Gorilla Glass (the same glass that’s on the front and back of the iPhone 4) on top of what looks like a parson’s table. The whole thing is only four inches thick and works with faster processors and sophisticated infrared sensors that give it finer resolution.

The secret to the creation is what Microsoft calls “Pixel Sense”, a miniaturized version of all those cameras that were formerly mounted underneath the glass surface of the table. Not only is this new version a lot tougher than its predecessor (can drop a beer bottle on it from 8 feet), making it much more appropriate tabletop for rowdy bars; it’s also a lot smarter. As Microsoft put it, “every pixel is acting as a camera, so the surface of the PC can actually see.”

Microsoft has taken the Surface concept another step further; now in addition to sensing fingers touching it, it can also read documents placed on its tabletop. In the demo, a piece of paper placed on the table was easily read by the Surface’s touchscreen.

The demo was amazing. This technology is getting a lot cheaper, and Microsoft says you might be seeing Surface PCs in a lot more places soon, such as bars, kiosks and other places developers might dream up that we haven’t even thought of yet. I would get one in an instant if it became much more affordable then “business affordable” but what do you think of it?