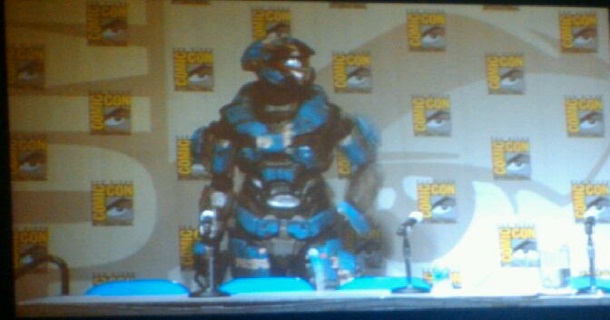 So, there is this game, you may have heard of it. It is called Halo: Reach, or something. Anyway, they had a special panel just for this little game at San Diego ComicCon this year in which a couple of the Bungie staff detailed some pretty amazing revelations.

The first of the news to be announced were a couple of new game-types. Both of which related to the Firefight game mode. Gruntpocalypse is pretty much as it sounds, you face of against endless hordes of grunts that get ever stronger the longer you last. The second type being a mode called ‘Versus” not sure if this is official or not, but in this mode you are no longer co-operatively trying to defeat swarms of covenant, you now are the covenant. You can also choose to be a spartan and go head to head with your buddies on the couch or online with the newly added matchmaking support for firefight. If you choose to be the ‘bad guys’ then you will have the support of the dropships sending down more baddies, just like in a normal game of firefight, though the Spartan just has himself and can win by killing his opponent a certain number of times or the other way around. There are numerous, nearly unlimited, customizations that you can apply for any multi-player game outside of campaign.

The next big announcement to come was a look outside the walls of Blood Gulch, or what is now known as Hemorrhage. I was not prepared for what I was about to witness. At first the lead designer showed off a bit of the new tools in forge (which I will go into later), then he hopped in a Pelican and ventured over the cliff to show off a vast land in its wake. This is what they called “Forge World” which you should have seen, in the ViDoc that showed this off, by now. The first area is a place called ‘The Island’ which is essentially that, a medium sized island next to a beautifully animated waterfall. Next up was a place called the “ceremony room” which looked like something the forerunners would have constructed, all metallic and cold, built into the side of a cliff. Finally there was a grassy patch above this which was totally empty and asking for your creative mind to vomit atop it.

The purpose of these landscapes? To create to your hearts content. Now, I could go into vast detail and exude excitement over the plethora of forge abilities that were displayed in this presentation, but that would take far longer to read and write than I or you care to. But I will say, anything you didn’t enjoy or you felt had been left out of the Halo 3 Forge has been fixed and added. You can literally create any map that exists in any of previous the Halo games. The most notable improvement is the way to set objects, there are three options. These include normal: let go of an object and it falls; static: let go of an object and it stays right there and finally; polymorph (?) which allows you to place any object inside another object or plane, which allows unlimited variations.

Forge 2.0 and Forge World is certainly Bungie going out with a bang. Nothing was mentioned in regards to campaign this time and I must admit that even without a campaign I am excited for this game to come out, which will be on September 14th. If all that wasn’t enough, Bungie also mentioned that there is a brand new vehicle, the forklift, to journey around Terra Firma in. You can’t splatter anyone with this sadly, but it does beep as you backup.

After Lionhead Studios curiously updated their forums with a new …

A Sony press conference revealed that the industry giant plans …